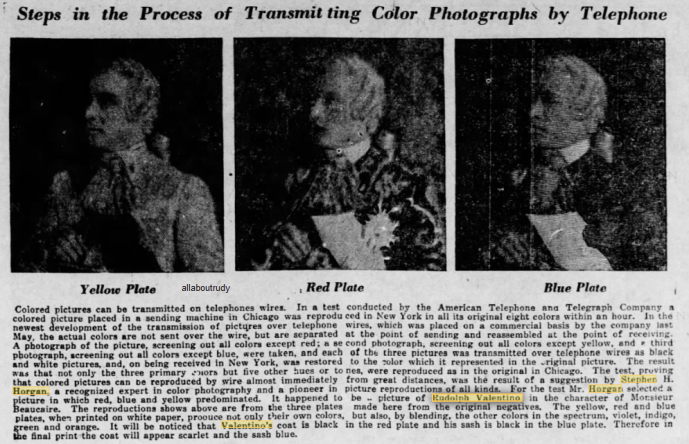 On 2 Feb 1854, Stephen Henry Horgan, was born in Norfolk, Virginia went on to live a long life and distinguished career. In 1880, Horgan a photographer invented a process of reproducing the tones of a photograph by means of dotted or checkered spots.  During the 1920’s, Stephen Henry Horgan, worked as a recording secretary, American Institute of Graphic Arts and during this time AIGA had great success in sending pictures over the wire.  Horgan an inventor had an idea of transforming black and white pictures into color over the wire.  In July 1924, Horgan made history, he took a portrait of Rudolph Valentino in costume as Monsieur Beaucaire used a process with three plate developed and inked in three separate colors blue, yellow, red and printed one on top of the other. The result was a color version sent by American Telephone & Telegraph Company wire from Chicago to New York.  For his remarkable achievement in the field of photography, Horgan received the AIGA medal which is presented to individuals in recognition of their exceptional achievement. Horgan was a pioneer in the field of photomechanical reproduction and was connected in various capacities with many printing, publishing, and engraving concerns. In 1934, Horgan a widower of 14 years, married his long-time secretary, Della Van Houten, 74 years old at St Anne’s Catholic Church, Nyack, New York.  On 30 Aug 1941, Horgan died at age 87 and is buried in Nyack, New York.