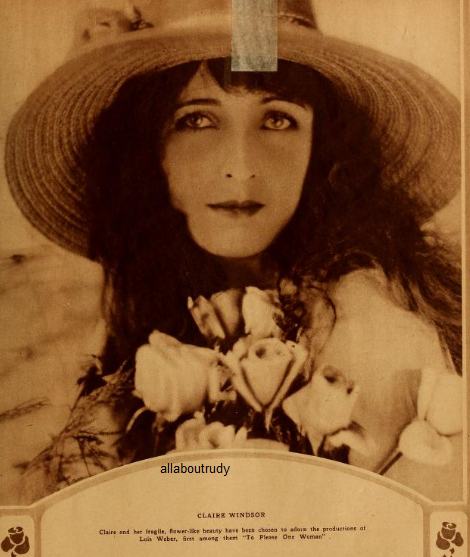 In 1913, Rudolph Valentino’s arrival to this country with not much money from his transatlantic crossing and unable to speak English he did doing what he could to survive.  Oftentimes, he faced homelessness, went hungry or swallowing his pride by taking lowly paying jobs. By doing so, he made just enough money to help with everyday expenses such as food, a roof over his head, or being able to take a shower.  As job opportunities came and went it seemed at certain times life would knock him down.  However, life always takes you places for a reason and it’s important to note, he learned a valuable lesson from each experience he faced.  As time moves on he finds that living in New York was not working out.  So, his friend Norm Kerry suggested a bright future awaits both of them in California and they made their way across the country to Los Angeles and an unknown future. Living in a new city, a determined Rudolph Valentino went on casting calls to all the major movie studios to no avail and found there were no immediate job opportunities in the motion picture industry for a virtual unknown.  Eventually he found work as a movie extra and his enthusiasm was garnering him notice. In 1919, after making the movie “Eyes of Youth”, with Clara Kimball Young, it is written in Hollywood history that June Mathis, Metro Studio Executive noticed the talented actor and wanted him a virtual Hollywood unknown for the starring role in “The Four Horsemen of the Apocalypse”.  Although it took some time for her to to persuade studio bosses that he was box office gold and in the end motion picture history was made.  From the first moment he appeared on the silver screen it was an immediate love affair with a movie going public.  His smoldering good looks and romantic visage a global audience was forever ensnared and life as he knew it changed.  What endeared him to a movie going public was his rags to riches story.  He achieved the American dream as a hopeful immigrant in this melting pot country and his success gave every other immigrant hope for their own success story.  The public was mesmerized by him and immediately wanted to know his life story.  Every movie in which Rudolph Valentino appeared he was a dedicated professional.  While his roles called for dramatic scenes often requiring physically dangerous stunts, he performed many on his own.  There were times, he had contractual disagreements with several movie studios, However, everything always worked out for him in the end.

In the 1920’s and beyond, Valentino had enormous influence both in the fashion world and on film.  His personal style was ahead of its time and always immaculately turned out.  He had extravagant taste in clothing and wore nothing, but the best labels of the day and his style was always duplicated.  Professional men wanted to know his style choices and what grooming products he bought.  In a NY Times article, Valentino briefly grew a beard for a film and the degree of public outcry was overwhelming. Fans wrote asking him to shave, and the Master Barber’s Association threatened to boycott his films for the damage he was doing to their business.

Valentino was a consummate professional and one of the first actors in Hollywood who fought for creative content control over any movie he would appear in and better pay this battle resulted in a well-publicized feud launched against his employer Famous Players-Laskey Studio. In 1923, during a well fought court battle he struck a new deal that gave him exactly what he wanted.  But his next films were not a financial success, and the blame was placed on his second wife Natacha Rambova.  The newly formed United Artists Studios brought Rudolph Valentino on board and in the contractual agreement it was noted they did not want her on set and kept out of sight.  In 23 Aug 1926, Rudolph Valentino died in New York City while promoting his final film “Son of the Sheik”.  His influence on the silent’s is well noted and documented by Hollywood Movie Historians for the ages. His memory lives on through social media, books, films and the annual memorial service at Hollywood Forever Cemetery. In a 21st century global community, Valentino’s work has garnered a new generation of fans that appreciate him and in the end, Silent Film Star Rudolph Valentino was one of the most profound actors of the era. His influence on the Silents will forever be known.

Isn’t there something you can personally do to rid us of the Valentino imitators? They are becoming awful here to say the least. In the first place the very fact they are willing to be groomed to take his place proves them incompetent; if they have any ingenuity at all they would create a vogue of their own and not try to shine by his reflected glory. they remind us of what Fabre refers to in his “bugology” as procressaries because of their habit of following one another. No single one of his imitatiors has sufficient initiative to branch out and create a demand for himself.  To begin with, few are so capable as Rudolph Valentino and from general observation and consensus I should say that he can handle more work turn out better work and earn larger dividends on the capital invested then any other star in his profession. Therefore, it would seem that he is worth conceding a few favors to. Don’t lets lose the greatest artist we have on the screen today just because of a broken contract with Lasky Studios. Some laws are stupid and mean’t to be broken. Why not break this one for the good of the public or at least for the amusement of the public? Famous Players-Lasky corporation is incapable of treating him fairly, why don’t they release him and let some other movie film company sign him up? Anything so that we may have our brilliant and lovable Julio and our handsome and gallant Gallardo back again. Hoping you will interest yourself in our behalf. 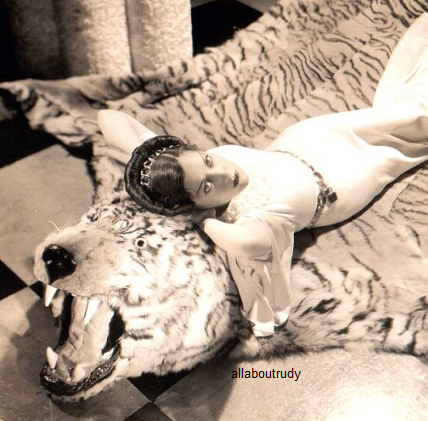 June Mathis used to think that her name was known to everybody in these United States of America as a scenario writer. But she’s changed her mind. The other day a circular letter came to her house stating that a fine course in scenario writing was being offered by the extension division of the University of California, Los Angeles. 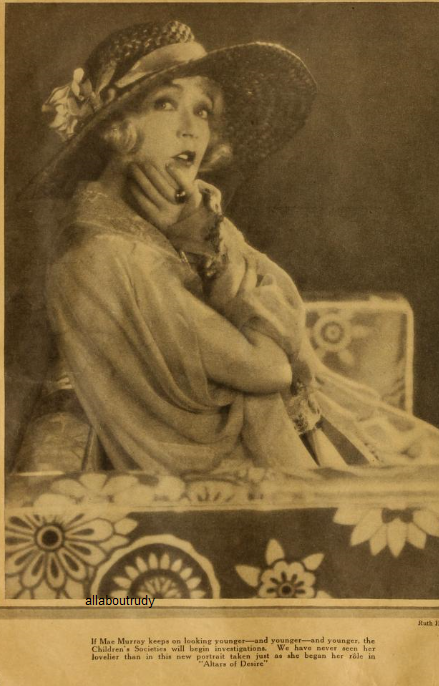 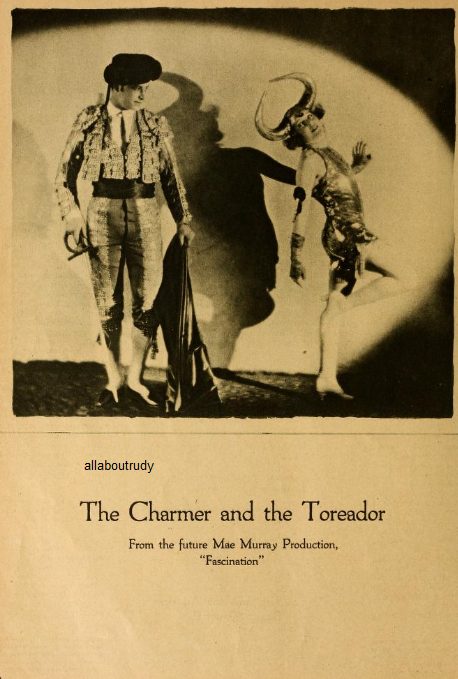 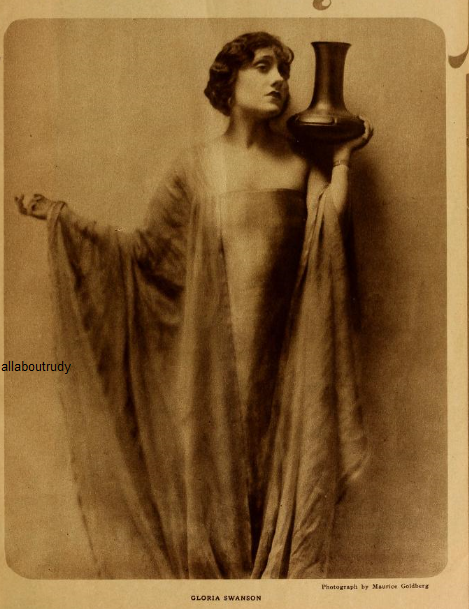 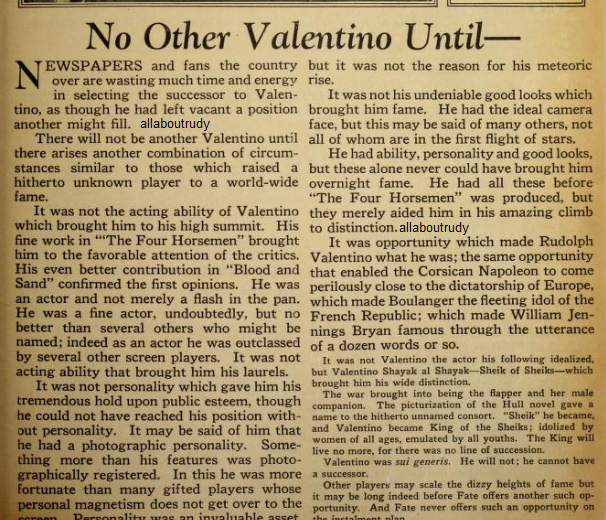 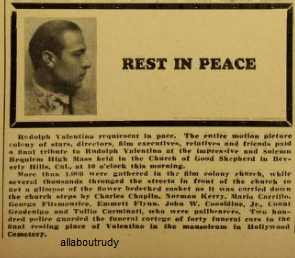 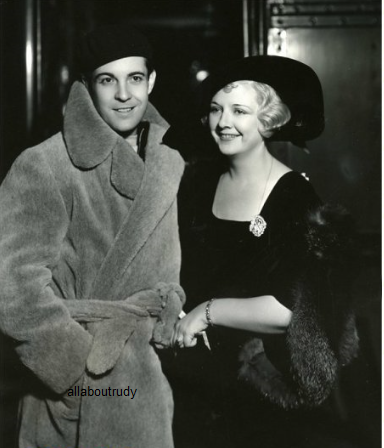 Last week’s pilgrimage by 1000 devoted fans to the crypt of the late Rudolph Valentino, on the occasion of the 11th anniversary of this death, will indicate how firmly intrenched a great actor can become in the hearts of his admirers. He is still fondly remembered by thousands, not merely residents of Hollywood but by great numbers in far-flung parts of the world. Each year, when the day of the star’s death comes, hundreds visit his resting place in a lovely corner of the Cathedral mausoleum at Hollywood Cemetery. This year’s group of worshippers was the largest. Fans remembered that Valentino’s favorite flower was the red rose, and the offerings which banked his crypt on his death anniversary were predominantly of this bloom. Worshipers who never forget, year after year, include his first wife Jean Acker; his brother, Alberto Valentino, Mrs. Emma Leutgeb and Mrs. Fanny Lichtenfeld. Mrs. Leutgeb living in Salzburg, Austria and Mrs. Lichtenfeld living in Richmond, Virginia annual send the cemetery money for bouquets of red roses. Faithful memorial groups which also sent flowers were the British Valentino Memorial Guild and the Chicago Valentino Memorial Club.

In 1913, life as an Italian immigrant living in New York City was very hard. Upon my arrival from Italy, I was overwhelmed by everyone else who was arriving from other countries who had the same dream as me. I did not know the language and relied on the Italian Community to help with obtaining a job, food, and housing. While I can honestly claim I was not good with money then and now. There is a certain humbleness when you relive memories of how life began here. Oftentimes I was hungry and spent many lonely nights without a roof over my head, shame and remorse-these comprised the cross of my humiliation. My false pride was grounded mercilessly to bits then utterly pulverized. I was kicked out of one lodging after another changing rooms four or five times over two months. Sometimes my clothing in lieu of payment. Sometimes I pawned my things in order to have a hot meal or a bath. One hot day I walked five miles to city hall looking for work and turn down then walked five miles back to my room.

My last room was a cubby hole cost me two dollars a week. I went to the Mills Hotel and got a room for 12 cents for one night only. The food was plain and plentiful. This hotel was built in 1907, and most guests were like me doing what they could to survive like countless others.  The next night I slept in Central Park. I looked for work every day. Usually I did not get it, sometimes I made 50 cents by shining the brass on cars, or by doing anything that anyone would allow me to do. I was above no work.

All right sue me! is the catchword with which members of the scenario department at Lasky Studios greet each other nowadays! Plagarism suits have become such an expense item on move budget books that many companies send back all orginial manuscripts unopened. After a picture is released the producers are flooded with letters typewritten on business stationery, scrawled with a pencil on cheap lined paper penned in violet ink and scented with Night of Love perfume, but one and all declaring “you’ve stolen my movie plot”.  Each case that is taken to court costs the studio about fifteen hundrend dollars in lawyers fees and wastes several weeks of valuable time, though complaining authors seldom win their cases. the damages asked vary.  A shoe clerk who sent in a story about young love and has afterward seen a picture of young love on the screen may deman five thousand dollars but he is usually willing to settle for a couple of hundred out of court.  Scenario editor Edward Montaigne has handled tons of scripts submitted by amateur writers, each of who claims to have a new idea.  He is a married man, everyone who meets him wants to tell a plot.  Sometimes he admits astonishing ideas are presented to him. For example, there is a spiritualist who is in constant communication with Rudolph Valentino. In the spirit world she writes Rudie has met Edith Cavell, who insists that he must make one more picture on earth. For a consideration, she will sell Valentino’s services to Universal Studio to write and direct a movie.