Asking for tolerance of a growing industry, and for aid rather than discouragement in a fight to raise the standard of motion pictures, half a dozen prominent figures in the film world addresses a large audience last night at Immanuel Presbyterian church hero. “We ask that intelligent censorship only be permitted,” declared Charles F. Eyton. general manager of the Famous Players-Lasky corporation. “Censorship in the hands of fanatics will ruin the movie industry.” Other speakers included Reginald Barker, Bert Lytell, Kathleen Williams, June Mathis and Rev. Dr. C. B. Winbigler.

From the waves to the field of dramatic acting. Virginia Warwick, one of the famous Mack Sennett Bathing Beauties, deserted the lure of the swimming tank and the sandy beach and appears in one of the stellar roles in “The Four Horsemen of the Apocalypse,” a Rex Ingram production for Metro, coming Saturday matinee for limited engagement at Loew’s State, with presentations at 2:15 and 8:15 o’clock thereafter. Miss Warwick in her portrayal of Chichi, the sister of the hero in this screen version by June Mathis, of the novel of Vicente Blasco Ibanez, gives to the Spanish-American beauty of the story that wealth of impulsive girlishness which one imagines such a character should possess. This former water nymph is from Missouri and came to California from St. Louis some two years ago. She was still attending high’school, being only slightly more than 15 years old —when in company with a theatrical friend she paid a visit to the Mack Sennett school of bathing beauties. Mack Sennett met her and for eighteen months her charm and beauty formed one of that galaxy of reasons why the beach of California is so popular with the motion picture fans. It was no accident or lucky chance that landed Virginia Warwick in “The Four Horsemen.” “Mr. Ingram didn’t happen to see me wandering about the hotel corridors or behold me dancing in a Los Angeles theater,” Miss Warwick explained. “I knew Mr. Ingram and had been looking for an opportunity to break into dramatic work. Director Ingram is a stickler for types and as I happened to fit his conception of Chichi, the sister of the hero in ’The Four Horsemen,’ I got the job.” 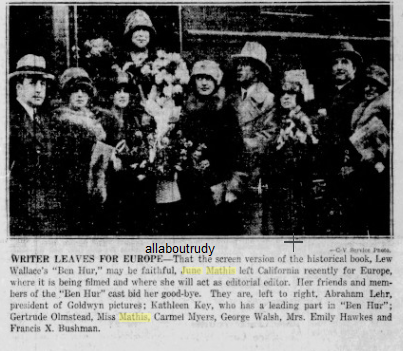 A Russian star, a French director, an American scenario writer and Italian camera man and a Chinese story are the chief factors in the colossal Nazimova production, “The Red Lantern,” starring Nazimova herself, which was produced in this city at a cost of over a quarter of a million dollars and which will be shown at the California. Nazimova is a daughter of Russia; her director, M, Albert Capellani, is French —for a number of years the most noted of all cinema directors in Paris, with Pathe; June Mathis, gifted American woman writer, prepared the scenario; camera man, Eugene Gaudio, is Italian, and the story, from the novel by Edith Wherry, is laid in an Oriental setting.

June Mathis as an extra on set of The Four Horsemen.

Word has just reached Salt Lake that June Mathis, known to nearly all old residents for her wonderful ability as an amateur actress, has become leading woman for the Shuberts in the Eastern Production of “Going Some” the Paul Armstrong-Rex Beach play, which carried New York by storm during the close of last season.  Miss Mathis will be remembered for her trips through Salt Lake with Ezra Kendall in an number of plays, but especially for her pleasing work as Polly in “Brewsters Millions” in which, she starred for two seasons.  Miss Mathis is with company No 1 in “Going Some” and will not come West this year. Rehearsals have been finished, and the play will open in Atlantic City for a week, when it will go direct to Chicago for an indefinite booking.  Later, the company will visit the larger cities of the East.  The charming actress has been steadily climbing toward the top of her profession during the last few years and now, less than twenty-two years of age, she has reached a station acquired by but few women the stage no matter of how varied an experience. but in spite of her successes, Miss Mathis is still June Mathis, unassuming, jolly and charming.  Now that she has become the leading woman for the Shuberts, she will not be seen by her home people for a year or two, at the least, but many friends will wish her continued success. W.D. Mathis and Miss Laura Mathis of Salt Lake are the father and sister of the rising young actress, and are overjoyed at her latest triumph.

June Mathis the scenarist who discovered silent film star Rudolph Valentino, is buried next to him in Hollywood. She secretly arranged it that way.

If allegations in litigation are correct. Mrs. Millie Hawkes of New York at 85 bobs and dyes her hair, has 50 pairs of shoes and five fur coats.  She is the mother of the late June Mathis, scenario writer, and is suing for half of an estate of $50,000 under an undated will. Silvano Balboni, her son-in-law avers he is maintaining her in luxury. Mrs Hawkes says your never too old to continue looking your best.

Following the death of his wife June Mathis, five years ago. Silvano Balboni returned to his native Italy to produce films.  But he is back now to supervise the technical details of Edward Small’s picture “The Melody Lingers ON” which has an Italian locale, and he intends to remain. Balboni started photographing movies in 1910 – he is 40 now and later he directed several pictures here and in England. While working in London, he induced a young stock actor to try the films. The actor was Ronald Coleman, Miss Mathis was a noted scenarist and the discoverer of Rudolph Valentino.

14 Apr 1928 – Silvano Balboni Will Get Estate of June Mathis

The entire $100,000 estate of the late June Mathis, prominent scenarist, will go to her husband, Silvano Balboni, motion picture director, under a decision filed today in Judge Crail’s court.  Balboni’s attorneys stated the director would care for Mrs. Millie Hawkes, 85 grandmother of Miss Mathis, who lost a life interest because she contested the will. Last year,  Mrs. Hawkins sued the director in court for $50,000. The director in-turn told the court she already lives in luxury with five fur coats and 50 shoes. Also, discovered during the contest that the will bore a printed dateline and was therefore, not entirely in Miss Mathis’ hand. ON this ground the will was declared void and the husband was made sole beneficiary.