“The best way to forget your troubles is to be constantly on the go. Keep on the crest of the wave all the time and never give yourself the time to think when things are bothering you.” Mae Murray, 1926, Former co-star of Rudolph Valentino

Rudolph Valentino, confirms the Impression that his engagement to Miss Natacha Rambova, which has just been announced, is to result in their early marriage. They will, however, defer their honeymoon until summer when they will enjoy a motor tour of Europe and pay a visit to the War’s family in Italy, whom he has not seen for a number of years.  The bride-to-be. who is a daughter of Richard Hudnut. New York manufacturing chemist got her professional name when she became a premiere dancer with Theodore Kostloff

I think Rudolph Valentino is lovely. I saw in “The Sheik”. Where was he born? How old is he? Is he married and to whom? Will you please give me his address? Do you think he will send me his picture? From Bright Eyes, Jamestown, RI

Rudolph Valentino is 27, born in Italy, married to Winifred Hudnut, he is with Lasky Studio, 1520 Vine Street, Los Angeles, CA. I say that at least 10 times every night in my sleep, I know it so well.

Lady Diane “Why–why have you brought me here?” Ahmed “Mon Dieu, are you not woman enough to know?” From the movie The Sheik 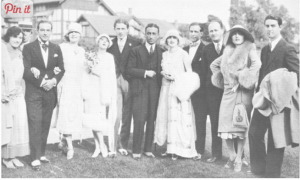 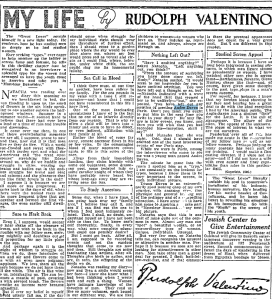 My Friendship with Rudolph Valentino

I had met many well-known personalities during those weeks in New York City and among them was Rudolph Valentino. He was a magnificently built man and his disposition was as delightful as his physique. Just to see his expressive hand lying on the back of a chair was art. Valentino and I happened to be in the same group one afternoon. He came over and sat by me and we seemed to be friends immediately. No wonder women were crazy about him. They were when I first met him, although he had not became famous as an actor then. But he had already done his chores and worked for recognition the hard way. I knew all this, somehow, without being told. Rudy and I had a unique understanding. We were attracted to each other from that first afternoon. Call it sex if you will, but more correctly call it a dancing friendship, which is why our bond lasted, lived long and strong. Rudy was drawn to me that first meeting and he was waiting for me after a Ziegfeld Folly Rehearsal that night. We went dancing – danced hours and hours. I’ll never forget that night another night of dancing rhythm. I was in all white and Rudy, tall and dark was in black we provided a striking contrast. When we walked onto the dance floor it seemed that everyone stopped to look at us. How Rudy loved to tango! He had a sense of timing quite unlike any other man I’ve ever danced with. It was late when we started home that night, and in the cab he put his arm around me. There was something sweet and tender, almost child-like about Valentino. I responded to this. I felt that he wanted to make love to me. I hoped he would have the intelligent grace to wish me luck and just be my friend. I wanted to keep his dancing friendship. Rudy was sought after. Women adored him became fools over him. I didn’t go that far. I have never been the clinging kind; Valentino seemed to find this attractive because he said that I did things to his heart. He became my shadow. I found him sitting in the theater during rehearsals watching and waiting for me. One evening he walked with me in the park. It might have looked strange to many of our friends had they seen us walking in Central Park at two in the morning holding hands, saying nothing, happy together. Now I was about to make “Delicious Little Devil” and word came to me that Rudolph was in serious trouble and needed help. Jack de Saulles had learned that Rudy would be his wife’s witness in her divorce from him. So, Jack to discredit Rudy’s testimony and through his influence, position and money, had been able to have Rudy held on a false charge. But Rudy was able to prove within a few days he was innocent of that charge and was freed. I knew the anguish in Rudy’s heart. I knew that he realized that he could do nothing to help the woman he loved, and that Jack was determined not to let her have her way in the divorce which meant taking the child with her to Chile. Rudy was now unable to get work in Cabarets. Jack had seen to that. In my picture Rudy took the part of the playboy son of an Irish contractor. The part brought him to the attention of the entire movie industry. He was very good. So good in fact that he was soon as we all know, launched on the brilliant career that began with his part in the Four Horsemen.

He is not dead for whom the thousands weep. The strong young body only lies at rest, The dark eyes closed in lovely ancient sleep, The warm heart stilled within the quiet breast, Where trees and flowers fragrant vigil keep. Above the couch of their beloved guest. As gently as Loves tender hands, earth lies on his dark head and leaves his spirit free. To win the greater goals of Paradise, and know the triumphs of that mystery which, veiled beyond our mute, horizoned skies, grants youths brief flame immortality.

Rudolph Valentino may come to Australia. It is Rudolph Valentino’s ambition to start a company of his own, and it is his intention to have Mr. J.D. Williams in with him. He says that after he has selected a play, he may go to any place in the world to produce it, for he believes that a motion picture should be taken in real surroundings, not in a faked setting. “so my next film,” he states, “maybe produced anywhere in the world – maybe in Australia, which country, I admit, fascinates me,” I has long been his wish to go to Australia.

Rudolph Valentino was a guest in Box 41, Metropolitan Opera House last evening. The film star was the object of general attention during intermissions, as he walked with his nephew a small boy in a sailor suit, on the grand tier promenade.

“Gossip – never related in the same way. When you eat hash you do not always recognize the different kinds of meat in it, do you? So it is with Twice Told Tales”..Rudolph Valentino

The name of Valentino may flash again across the silver screen Jean Guglielmi Valentino, 14 year old nephew of the late Rudolph Valentino has arrived in New York from Italy in quest of film laurels. He announced his hopes to take sheik roles in Hollywood pictures. 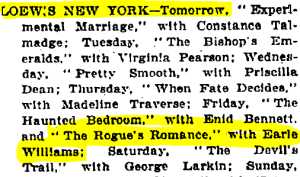 Rudolph Valentino’s death has created a remarkable demand for all films in which he was featured, and in this respect he is unique. Old pictures of his have been revived later productions are having a new popularity. Virtually “discovered” as regards the prominent part of his success in 1920 by June Mathis and featured in the celebrated Rex Ingram/Mathis picture of the war, Valentino’s career as regards its major portion was only six years in duration. During that time he spent nearly two years away from the screen. His romantic appeal and fame have been world-wide and apparently are even despite his death.

Pola Negri and Rudolph Valentino maybe subjects for cupids attention
and they may be married in Europe next year, as Pola’s mother recently
announced. But box-office rivalry goes on just the same! This fact is
strikingly borne out by the appearance of Rudy and Pola on the screen
this week at different theaters. Valentino opens today in a special
premiere showing the “The Son of the Sheik” at the Million Dollar
Theater. This film is a sequel to “The Sheik” and marks his return to
the burning sands and equally burning love scenes that proved so
successful in the earlier picture. Valentino will have as his guests at
the second performance this evening a large party of motion picture
stars. “Good And Naughty” is the new alluring title of Miss Negri’s new
vehicle, which will be seen at the Metropolitan beginning tomorrow. The
polish star plays a role wherein love is the inspiration that leads the
heroine to throw off her dowdiness and reveal her true loveliness.

No one of the stars want to be stars anymore. They all want to be producers and it doesn’t seem to bother them in the least whether they submerge their personalities to some extent, so long as the resulting feature is enticing to the public. Now it appears that Rudolph Valentino is also wanting to become a producer through his independent efforts. Valentino said that his purpose above all, under his new contract, would be to make pictures that will be outstanding as pictures. All the details of actual production will come under the supervision of his wife Natacha Rambova and he is making the choice of the members of the cast and is going to get the very best talent available. Furthermore, he plans to develop new talent, or at the least new phase of the personalities of established favorites. Notably he is using Nita Naldi heretofore the vamp as a heroine. Valentino’s experience with “Monsieur Beaucaire” is a case in point. “When they first showed my wife this picture at the studio, it was overburdened with close-ups of myself,” he said. “My wife insisted on the removal of dozens of them. “Somebody concerned in the cutting and directing, remarked to her that he hardly thought this course would be satisfactory to me, but she quickly informed him that despite any beliefs to the contrary, unnecessary close-ups were not my idea of starring.” Which should settle for a time at least, these rumors that Valentino is intent on acquiring as much footage as possible when he is appearing in a picture 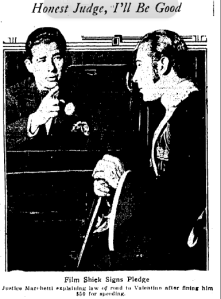