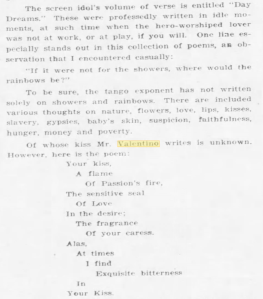 “People come and go in our lives. Its very important to spend time with those around you that matter the most”..–Rudolph Valentino

Natacha Rambova is about to abandon the dramatic sketch, “The Purple Vial”
in which she has been appearing, and instead makes her debut as a dancer in
an elaborate act which will almost certainly turn out to be a divertissement at the Palace this spring. 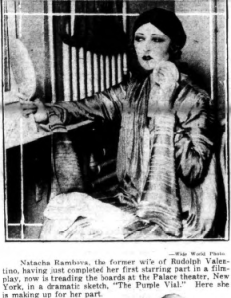 Lewis and Gordon announce the Broadway premiere in a speaking role of Natacha Rambova (Mrs. Rudolph Valentino) in “The Purple Vial” at the Palace Theater, Monday afternoon, Feb. 8. Miss Rambova will play an exciting dramatic role In a one-act play by Andrew De Lorde. It is expected that many film celebrities will attend the initial performance.

Rudolph Valentino, screen actor who has been caught speeding before may have a jail sentence meted out when he answers a charge of speeding before Justice Marchettl next Tuesday. Valentino is charged with driving 38 miles an hour along Santa Monica Boulevard, a 20 mile limit zone. Justice Marchettl has recently declared war upon speeders and has meted out many Jail sentences.

Edward Schmidt, a local tailor, has brought suit against Norman Kerry, screen actor and friend to Rudolph Valentino for $366.36. He charges that Kerry owes him this money for four years for clothes he made for him and refuses to pay it.

“You can measure cloth by the foot but can’t measure art that way”. -Rudolph Valentino, 1923 Illustrated World Article

When it comes to a matter of experience Alberto Valentino has much more right to the role of the man of the world Rudolph Valentino. In fact Alberto has seen an active and a successful life. He no doubt regards his present objective as a new adventure, and any trail that may lead to fame or fortune is a game worth Alberto’s candle. He has been a successful journalist, writing with influence for papers in Taranto, Rome and Milan. In the World War he served in the army with such distinction he was appointed crown minster by King Victor Emmanuele. He was admitted to the bar at the age of 21 and for 12 years coupled with his journalistic activities. He carries an honorary degree in law from the University of Bologne. Alberto was the brother Rudolph referred to whimsically as the “the pride of the family” for it was Alberto who was passing his grades when Rudolph was being dismissed from military school and being sent to America by an exasperated family. But if Alberto led the life of a man he was to pay for his success from his physiognomy. When he went to Hollywood a year ago to adjust his brothers affair there were deep lines in his face though his eyes and Latin fire, there were little pouches beneath them telling of nights spent over briefs and proofs in the pursuit of professional distinctions. In adjusting his brothers affairs, the sensible Alberto came to the speedy conclusion his brothers greatest heritage was his name. The word “Valentino” spelled romance to millions. The success of Rudolph was more than the popularity of the actor, for it was one of the player’s perplexities that his public often preferred his bad pictures to the good ones. Valentino was simply Valentino and his acclamation could be explained by that blind hero worship the public occasionally falls into. Alberto told his thoughts to June Mathis, who had been the discoverer of his brothers talent. She proposed Alberto continue the name as a tradition of the motion picture. Alberto saw the point but he shrugged. He was older and he had lost his looks. Thereupon Miss Mathis advised a visit to a surgeon and the modeling of a new face upon an older head. The elder brother pondered. Eventually he complied. In addition, to the lines of his face, it was discovered he had a far too prominent nose to be used to advantage on the screen. This nose according to Miss Mathis, was the principal obstacle he had to overcome. With a bust of Rudolph for a model, the same surgeon who gave Jack Dempsey his famous nose molded the appendage of Alberto into a softer and more classic outline. He also removed a part of his chin. Alberto had the determined chin of a fighter, which was too domineering to grace the face of a “great lover’/ In the event I do not succeed, he says my son will endeavor to follow in his uncle’s footsteps. The boy is 13 years old and looks like Rudolph. His name is Ojovanni and he is now in school in Turin. We decided his screen name will be Jean Valentino. I have high hopes for his success. Alberto says Rudolph did not favor his entering motion pictures either as an actor or in a business connection. He felt Alberto’s professional success was too well established for him to risk everything on a theatrical adventure. However, Alberto had a secret yearning for the stage in his early youth. The nearest he ever has come to an expression of it was as a dramatic critic in Rome and Milan and as the author of several short plays. So in his 35th year Alberto Valentino is setting out on as strange an errand as ever occupied a man; the recapture of past youth and beauty and the rekindling of a dead flame with them.

“I prefer to retain the memory of the sweet boy I married, and surely if there is one person who has worked hard enough to be worthy of success and that is Rudolph Valentino. I admire his courageous fight to fame. Despite the fact, we past the parting of the ways, I can look back and see there is much in my husband that I admire”..–Jean Acker, 3 Sep 22

A lot of books were written about Rudolph Valentino of course there are a few that are considered “out there”. One of them is called Return of Rudolph Valentino written by Carol McKinstry. I am currently reading the book so the foreward was abit fascinating to me so I thought I would include some verbiage:

Some of you already know that I possessed psychic literary ability, executed for your approval, thought and entertainment in the book of poems titled “Day Dreams” bearing my name as author and published by Macfadden Publishers in the year 1923. Hence that I should take up my pen again from this side of eternity should not surprise you. Soon after the beginning of my career in pictures I became intrigued with the desire to write a scenario for the screen an original script with a vivid, colorful desert background and reincarnation the theme of the story. But something always came up to interfere with my plans for so doing. I know now why I was thwarted and conjectured the plot now I wrote with absolute knowledge whereof I speak. And so I died in the flesh to complete from Spirit a far more finished production of my erstwhile hearts desire. Others may philosophize in dry and tedious argument to win a point in truth; I too, may resort to such, in part, where there is need to clarify a statement. But my main object is to show you thorough dramatization the knowledge I have gleamed as to how the law of the universe acts in shaping a path for our continual progression and evolution throughout eternity. Pray for me; enshrine me in your memory, but do not hold me in a bondage of sensual delusions that engulf me in shadows of distasteful memories and create a formidable barrier to the freedom and progress of my soul..

I hate the Sheik, I think he’s a ‘he-vamp.’ and I hate the way he rolls his eyes, l know Sydney girls have got Rudolphitis and I know that my young wife sees the Sheik in everything – the grilling steak holds his image the wringer holds his spirit. But I hate him. I hate a man who rolls his eyes snd behaves like a Spanish senorita. I cannot understand the army of girls who have fallen to his cheap charms. Girls who see romance in the Sheik would see romance in the butchers boy. They represent decadent flapperitis in its most advanced stage. Give me a man like ‘B.J’ Hart, who represents manhood in its greatest sense. Why is It that the fair, frail flappers of Sydney have gone on about a man who rolls bis eyes and makes prisoner of a poor, pure pretty girl alone and defenceless. Do they approve of his lax morality? Is it an indication of degeneration! Do the girls of todays countenance a man who defies decency to compromise an Innocent woman?