In this morning’s mail arrived a letter and an enclosure which leaves me gasping. The note to me reads “I couldn’t find Mr. Rudolph Valentino’s address, so I am writing him in your care. Will you kindly forward it to Mr. Valentino. Thank you.” The enclosure reads “Dear Mr. Valentino, Congratulations! I saw your performance in The Son of the Sheik and thought you were grand. This is the first picture I ever saw in my life, and I hope to see every picture you make from now on. Keep up the good work!” I am still trying to decide whether there actually is someone ignorant of Valentino’s death or whether I am being ribbed.

An attachment against the property of Rodolph Valentino was ordered last week in the Supreme Court in a suit brought by his former attorney, Arthur B. Graham, for a balance of  $48,295 alleged to be due for services and disbursements. The attachment was granted on the ground that Valentino is a resident of Hollywood.  In his affidavit, Mr. Graham alleges that he conducted all of the actors litigation with the Famous-Players Lasky Corporation, excepting the writing of the brief on the appeal to the Appellate Division; that he represented Valentino in supplementary proceedings brought by his creditors; went to other cities, talked to newspaper men and thus prevented adverse criticism.  Mr. Graham values his services at $ 65,000 and says that he has received but $ 20,000. A copy of the attachment was delivered to the uptown branch of the National City Bank where Valentino is said to have a good sized deposit, a copy was also served on The Mineralava Company, which is said to be interested in Valentinos present dancing tour.  Other law suits in which Valentino is involved includes an action started last week by he and his wife, Winfred Hudnut through their attorney, Max Stauer, who applied for an attachment against Scotts Preparations, Inc., claiming $ 7,000 for the termination of a series of beauty contests and dancing exhibitions in which they and one of the Scott products were featured. This tour terminated in Chicago two weeks ago , after the president of the company, asked the director of the tour about reports of a $ 2,500 guarantee for each nightly dancing exhibition given by the Valentinos. They were engaged for seven weeks, they explained, in asking for the attachment, at a salary of $ 6,000 a week and $ 7,000 at the end of the tour.  The $ 7,000 is the reason for the application for the attachment. The Valentinos had hardly applied for this attachment when Arthur Butler Graham, of 25 West Forty-fifth street, had served a writ of attachment on Pokres for one weeks salary of the Valentinos.  Mr. Graham, who represented Mr Valentino last year in the litigation with Famous Players-Lasky Corporation, I started an action to recover $ 40, 000 from Valentino, which he claims for expenses in that case

The spirit of Rudolph Valentino returned to earth a few days ago during a séance in a New York office building and announced to a gaping audience that he died not die a natural death, the United Press has been informed.  Valentino said, however, that he wasn’t going to tell on anybody that he didn’t want to cause any suffering. The séance was arranged by Major R.T.M. Scott, Chairman of the American Society of Psychical Research. George Wehner described by Major Scott as a reliable medium served as the personal medium for Ruth Roland, former film star and friend of Valentino was one of the guests.  Major Scott took an attractive stenographer with him to the séance although he admits she caused him considerable worry. He was afraid the girl would become nervous upon hearing the dead actor’s voice.  But it turned out that she wasn’t afraid at all. Twelve questions were put to Valentino and he answered all of them. He was asked “How did you die” “Was there any justification in the rumors of shooting or poisoning”? The spirit of Valentino answered “That is very difficult for me to answer while speaking through the medium, “because it involves many people. I will say that I did not die a natural death. I am not going to divulge any names, I have no desire for revenge, contrary to the opinion of most people have about Italians. I do not wish to have any suffering come to them more than will come to them through natural causes. We cannot do wrong without suffering the consequences.  I think I would relieve them if I could”. He was asked if he saw Lon Chaney around anywhere and if any other from people were with him. The spirit answered “he is hobnobbing with Barbara LaMarr and Olive Thomas, I have seen Milton Sills, I have seen my dear June Mathis and her mother Jennie. Valentino said, according to Major Scott that he goes back to Falcon Lair in Hollywood occasionally but not to “haunt it”. He returns to walk around the place and live again the old days in memory.  He asked for his opinion for film stars. He answered he does not think anyone has reached Charlie Chaplin’s place in comedy, Gloria Swanson is a great artist and Greta Garbo’s voice is wonderful for expressing emotion. The spirit remarked that if he were alive today, he would go into the talkies. “I had a good voice”, he said or “so people said” Valentino, according to Major Scott said that he is not settled in this present sphere, but he doesn’t know whether he is going to be moved around or not.  He believes, however, he will eventually progress to “higher planes”.

Posted on 25/07/2019 by 1920rudy
In 2017, Antiques Roadshow, was in Harrisburg, PA and during the taping someone brought in a Rudolph Valentino gifted bracelet.  This sterling silver bracelet was addressed to someone named “Rudy” and they did not know who this was. The appraiser valued this bracelet at $2,000– $3,000.
https://www.pbs.org/wgbh/roadshow/season/22/harrisburg-pa/appraisals/1925-rudolph-valentino-gifted-bracelet–201701T29/ 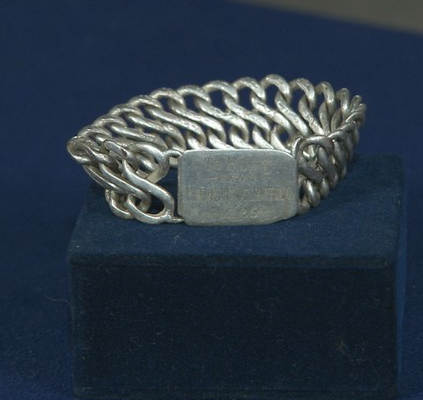 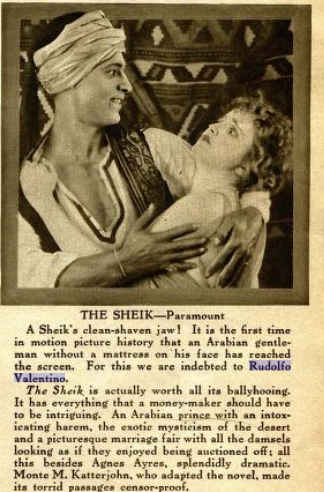 No one would attempt to deny that Rudolph has had a severe setback.  One of the very big directors told me it was his opinion t hat Rudy had been all but assassinated professionally by the too open attempts to advertise him as a lady-charmer.  According to the opinion of this director, that has been Rudolph’s trouble.  He was touted so heavily as “the great lover of the movie screen” that has aroused the resentment not so much of men as of women.  Valentino and other famous silent stars of the time.  In every one of these famous stage careers there is a core of tragedy, of futility, and failure. 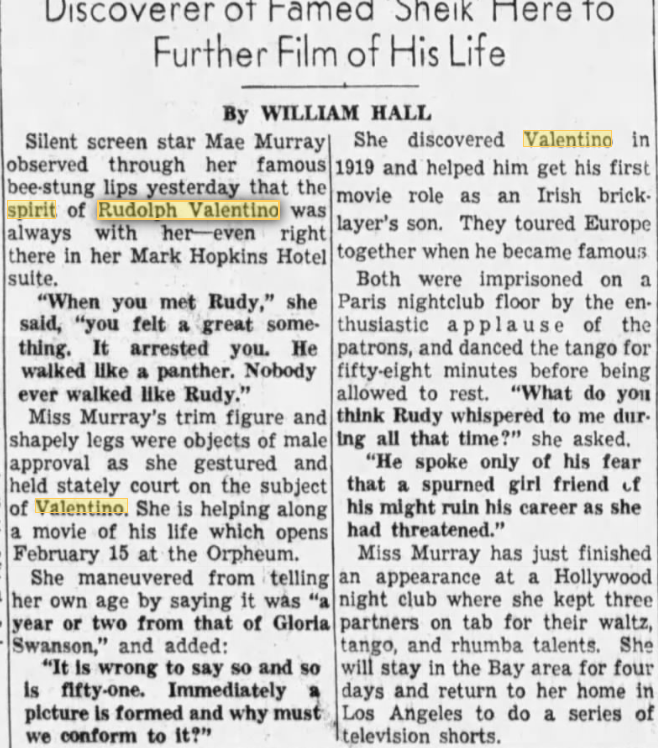 Jacques Bustanoby, 62 who could and did produce dinners at a $100 a plate, who introduced New York City to the novelty of restaurant dancing and established the first bar for women, died yesterday.  Once he employed the late Rudolph Valentino at $10 a week to dance with customers. 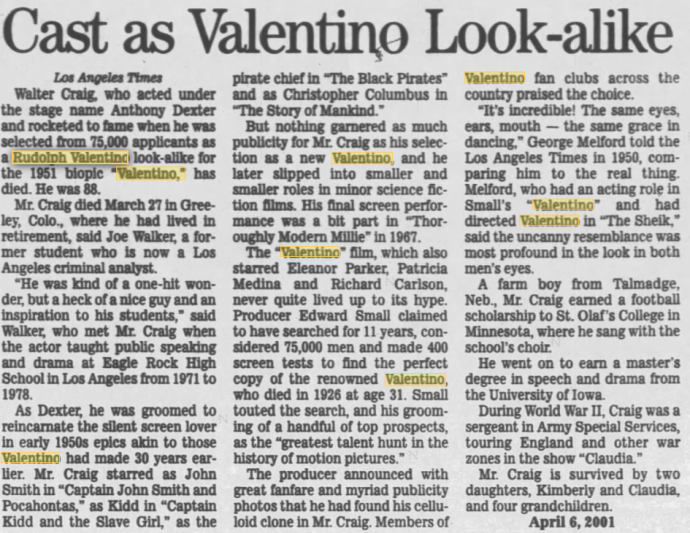 Cerutti’s bartender, Nick Morgen, had a glamourous past for awhile when he worked as a stand-in for Rudolph Valentino when the great lover was the heart throb of the nation.

For a time in New York, I worked with Rudolph Guglielmi at the afternoon tea dances in Churchills Café. We’d sit at a table with a hostess until there would be a sign from a woman that she wanted a dance.  So, we would go over and dance and we received $2 for an afternoon.  George Raft said although I could dance those times were more demanding than when he became famous.  Rudolph Guglielmi had a carisma that cannot be denied.  He was a popular dancer and made the most ackward looking woman glide like a swan while dancing.

My housekeeper is an expert on the Great Lovers, she used to work for a woman who was a close friend of Rudolph Valentino. “He was very quiet”, says my housekeeper. “He hardly had a thing to say. He used to take off his shoes the minute he came in the door and sit around all evening in his socks. He was absolutely nothing”. Naturally when word got out a few years ago, that the late Aly Khan was coming to dinner across the hall, she went straight to the neighbors cook “Rudolph Valentino was nothing, but I hear this one is the greatest. For goodness sake, just let me get a good look at him. The man she saw sitting at the Vasco Garans dinner party was no matinee idol. He was of medium height and almost on the plump side. He looked tired and middle aged, with a sallow skin and dark circles, and was losing his hairline. Again, he was absolutely nothing says my housekeeper”.