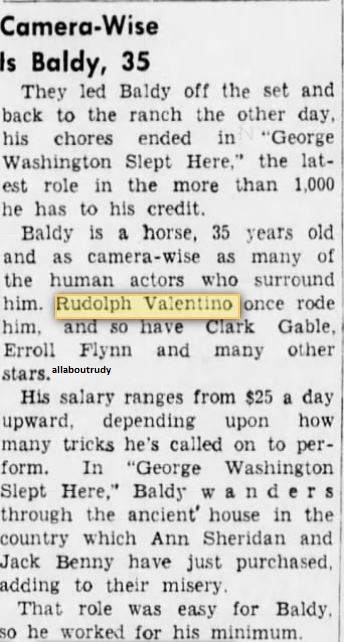 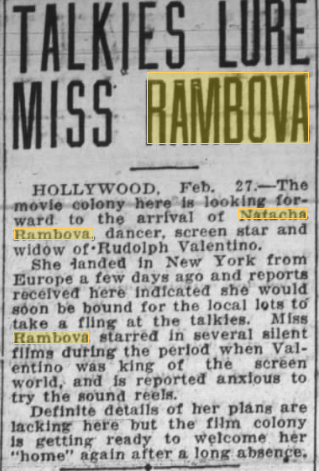 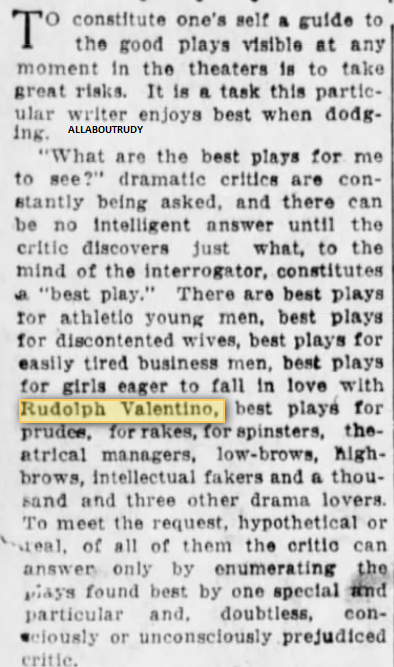 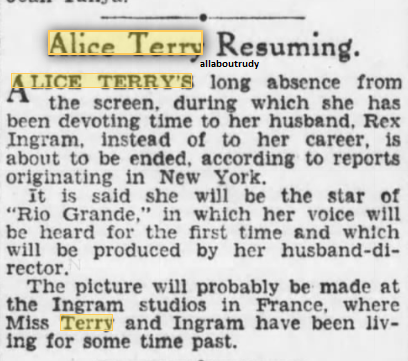 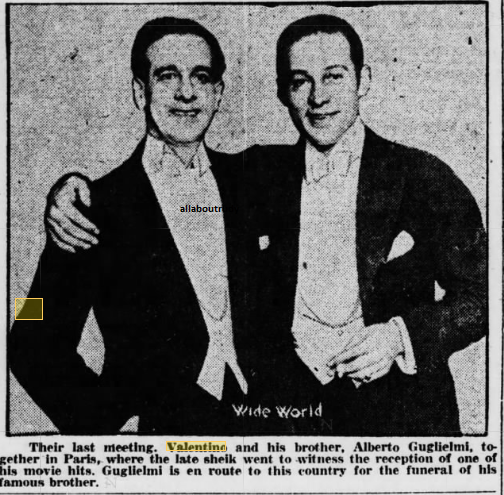 24 Jun 1973- Valentino not Dolls for this former child star

The memories for a former silent film movie child star are strong and one in particular is Rudolph Valentino was a frequent dinner guest.  The uncle of Thelma Daniels was atage actor and when he got into movies he would take a six year old Thelma along for dancing and singing lessons.  She started out in small minor rolls and grew from there. A semi-regular in the “Our Gang” reel comedies she played the snooty rich girl.  Also, she starred in several Marx Brothers movies where she played the blonde that Harpo would always chase. Rudy would always come over to her uncles around dinner time on the pretense of teaching her to dance. He was very continental and charming to a little girl who idolized him.  When he died it was a sad moment that I have never forgotten. 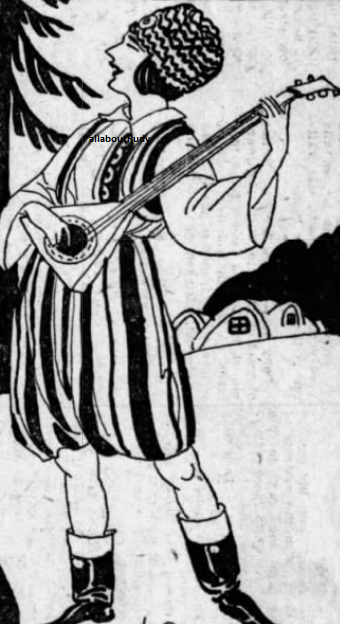 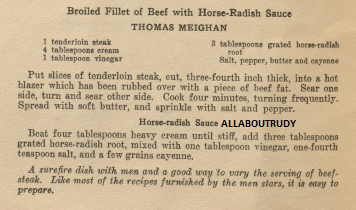 Thomas Meighan was a silent film actor, patriotic Irishman, and a extraordinary cook loved sharing recipes with others as well as enjoying home cooked meals versus dining out like other movie stars of the day did.  In March 1923, Douglas Gerrard, in need of help bailing his friend and fellow actor Rudolph Valentino out of jail for bigamy, called up a fellow Irishman named Dan O’Brien who happened to be with Meighan at the time. Meighan barely knew Valentino, but put up a large chunk of the bail money with the help of June Mathis and George Melford, Rudolph Valentino was eventually freed on bail. Valentino never forgot the kind gesture of those who came to his defense when no one else would help in his time of need.  They remained friends for the rest of Valentino’s life. 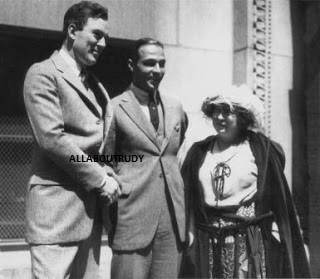 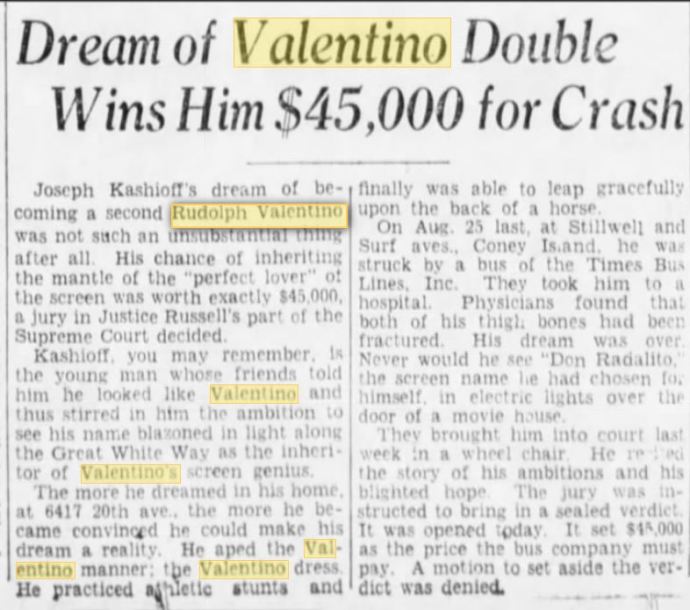 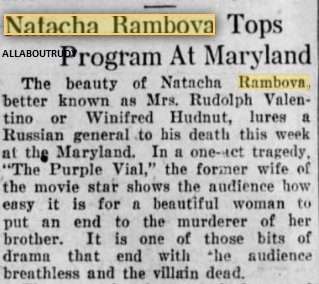 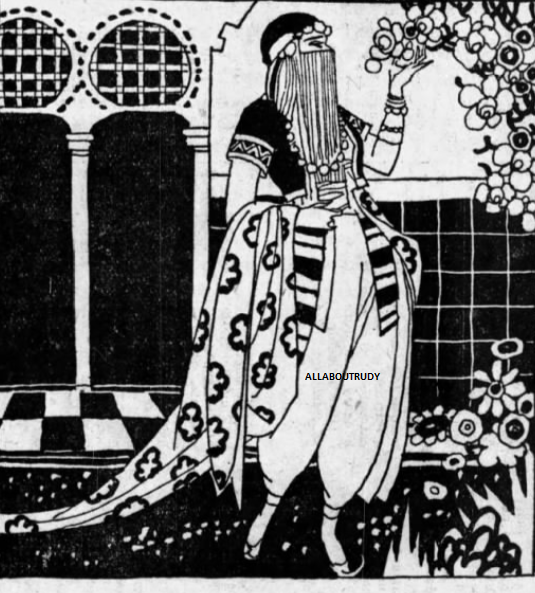 Posted on 15/02/2020 by 1926Rudy
In the first place, I feel no need to apologize to humanity at large for making women’s clothes one of the major interests of my life.  Instead, I believe, that the person who tries to lead women into cultivating beauty of color is doing as much for the world as any philosopher who ever tripped over the thong of his sandal.  The student of dress, it seems to me helps women to polish the facets of their personalities, besides garnishing the urban scenery enough to make our cities most endurable.  The truth of the matter is clothes are a creative. Women for some strange reason react mentally and spiritually to the fabric they place over their skins.  It is the nature of women to try to live up or down to her clothes.  Put a tired, kitchen-worn housewife into a perfect evening dress, groom her to a match, and watch her evolve a new personality in less time that it would take a brisk genie to crawl out of a bottle.  Outside of the homes for mental cripples, there probably isn’t a woman in the compass of all the seven seas who doesn’t become more gracious and show a brighter mental luster when under the influences of a satisfactory gown.  The great French shops are coming to specialize more and more in certain types of design, regardless of the aimless winds of style.  Lanvin, for instance concentrates on long-skirted dresses of the 18th century mode on things for a woman who looks best against a background of porcelain shepardesses and tapestried views of idyllic gardens. Poiret likes to create gowns for the sim-tropical woman the sort who look as if she had a breath of Chinese incense in her soul, or had spent her last incarnation dustings jade flowers in a temple of Ceylon. Jenny’s special delight is making tight-bodice and full skirted gowns for the whipped cream variety of jejune file.  The wise Parisians buys the same type of clothes year after year from the same designer, conforming to style in details but never in principle.  Thus, the first thing that an American should do who wishes to be well-dressed is to turn to someone who can help.  A woman who belongs to the petite doll-like species should never wander away from a childish outline. Her dresses should fall either in straight lines or in the fluffiness of floating tulle. She should be careful to keep away from dresses that are draped.  Gowns that look as if a bolt of material had been thrown gracefully over the shoulder of the wearer belong solely to the blood relations of the Statue of Liberty. The small woman who wears them succeeds in resembling a dressed up pop bottle. She should pin her allegiance to sport clothes, straight simple little daytime frocks and to the afternoon and evening owns that billow like clouds on a windy day.  Incidentally, the petite Dresden shepherdess is one of the very few who can wear very short skirts to the satisfaction of everyone concerned.  If a woman decides she is essentially sweet and feminine, she should rally around a standard of filmy materials and delicate pastel shades.  Floating panels and gossamer scarfs would help to give her the misty, ethereal quality that many men picture is their idealization of a woman. A person of this type should side-step severely tailored clothes.  The quiet rather conservative woman who has a dignified charm and who wishes her intellect to be taken seriously should wear long and graceful looking simple gowns. Soft satins heavy crepe and soft wools make the best backdrops for poise and dignity and the authority of an assured position. Next comes the transplanted orchid type girl the sort that for want of a better word “exotic” artsy and burns incense in her boudoir.  She has a dash of the orient in her, and likewise, runs riot among embroidered phoenixes from China, stiffed-necked lotuses from the Nile and brightly figurines that ride in endless procession around the borders of ancient Persian manuscripts.  The woman needs to truly look at herself in a mirror and the picture tells if the shoulders are too broad, the woman who is examining herself should go at once to her closet and snip off every silk chrysanthemum that might be reposing above an armhole. Then raising her arm to the ceiling she should vow never again to buy a gown with a broad bateau neckline, confining herself exclusively to a v-neck or to such rounded incisions as terminate a long way from the shoulders.  One point to remember is that the design on a gown should always be placed so as to draw the eye to one’s best lines and away from points that can’t stand publicity.  Let’s talk about cheap stores that sell cheap gowns made out of boisterously patterned silk or trimmed with everything left over from Valentine’s Day. Therefore the girl who cannot afford expensive dresses should buy her clothes ready-made. She should select two or three designs that are most flattering to her figure and buy some good material from a reliable department store and have it made up by a neighborhood dressmaker.  Good material whether silk or wool doesn’t stretch or sag or grown shiney after it acquires many service stripes. Besides, it can always be repurposed and used again when the wearer grows tired of this present design.  In the end, regardless of how you see yourself take pride in your appearance.  Do your homework on what materials and designs best suit you and your budget. 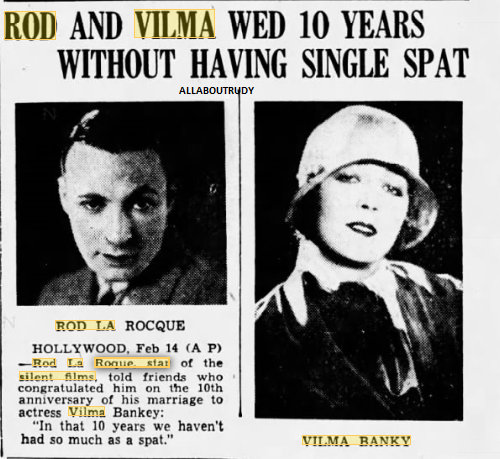 Having finally despaired of getting Griffith to direct “Ben Hur” the Goldwyn Company has given the big job to Marshall Neilan.  They hope to have Valentino to appear as Ben Hur. 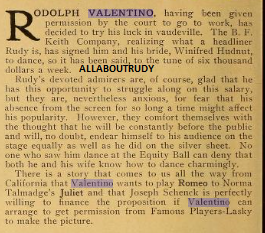 The above is a snip of Natacha Rambova’s NYC Phone number. 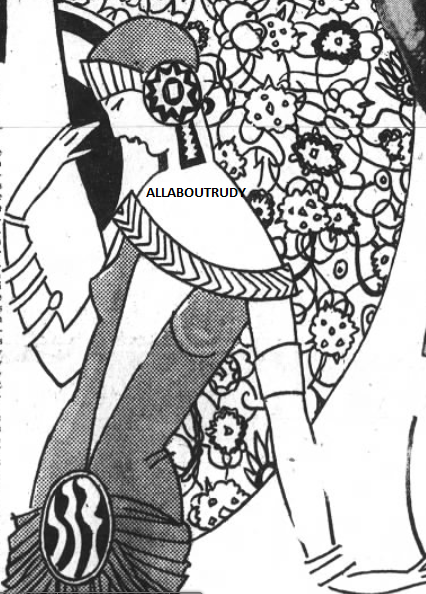 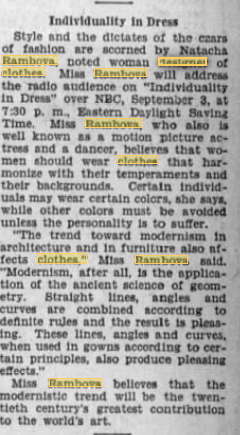 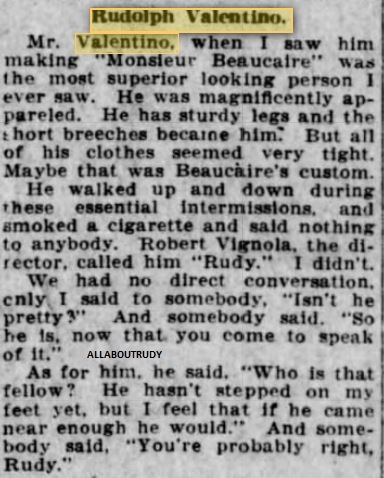 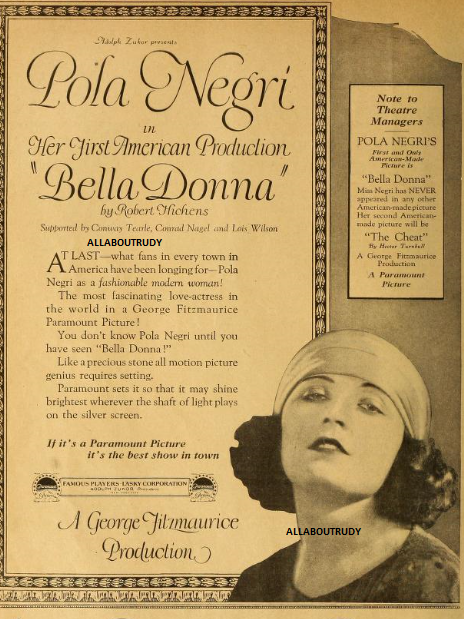 You know that every extra comprising that large mob hopes some day to attract the attention of the director and as in a fairy tale, win fame and wealth as a Valentino or in the case of many older men a Theodore Roberts.  So, it goes, once in a while, as in the instance of Valentino himself, one of them does step out from the ranks.  And that isolated instance feeds the hopes in the thousands of starved breasts. Extras seem to us symbolic of the human race, so hopeful, so brave in their individual ways, so utterly futile generally so full of dreams of the day their opportunity will come.

Valentino is more than the idol of the hour.  He is a thinker who has the courage of his own convictions.  He has recently written for the Rookman, a literary feat heretofore, unachieved by a cinema artist.