First off, I want to thank you for this opportunity to interview you for my blog. Mr. Robert L. Harned, a noted author, is going to be writing a future article for a publication yet to be determined about George Wehner who was a friend of Natacha Rambova in the mid to late 1920’s. Mr. Harned’s mother Ms. Sally Phipps was a silent film actress with Fox Pictures who personally knew George Wehner. However, Ms. Phipps never knew nor met Natacha Rambova.

1. Your mother must have led an interesting life. Could you please tell us a little about her and her connection to George Wehner?
My mother, Sally Phipps was only three years old and the veteran winner of several beautiful baby contests when she appeared as the Baby in the film “Broncho Billy And The Baby.” It was made at the Niles California Essanay Studio in late 1914. Her memories of the early years at Essanay include sitting on Charlie Chaplin’s lap and enduring a frightening stage coach accident. In her teens, she was a Fox Studio star appearing in 20 films, including a cameo in the classic “Sunrise.” There were bad times also. She was on the set of her Fox two-reel comedy “Gentlemen Prefer Scotch” in 1927 when word reached her of the tragic death of her father, a state senator. But in that same year, she was selected as one of the 13 Wampas Baby Stars, starlets that were considered destined for future success. Despite her popularity in Hollywood, she left for New York where she became the darling of gossip columnists, particularly Walter Winchell. She appeared in two Broadway shows, made a Vitaphone comedy short, and married and divorced one of the Gimbel department store moguls before she darted off for India and around the world travel. Back in New York, there was another marriage, two children, and later a stay in Hawaii. Earl Wilson wrote about her in 1938 when she was working for the Federal Theatre Project during the WPA period — headlining his column “Wampas Ex-Baby Lives On WPA $23 – And Likes It.” She received the Rosemary (for remembrance) Award shortly before her death in 1978. Her images — especially her pinup photographs — have become highly collectible. Although Sally may never have met Natacha Rambova, she claims to have rented an apartment previously owned by her, a fact corroborated in several contemporary newspaper articles. The unit was in an apartment building at 320 East 57th Street, near Sutton Place. Sally rented the apartment for a period during her September-May stint, playing the ingénue in the Kaufman and Hart comedy hit “Once In A Lifetime” during the 1930-1931 Broadway season. Sally Phipps was always attracted to the occult world and through it developed several close friends. One of these was George Wehner, whom she first met in 1933. They stayed friends throughout the 1930s, with an interruption in the fall of 1939 when Sally left for a one-year stay in India. After she arrived back in New York City in February 1941, Sally phoned Wehner to tell him she was in town. A man answered the phone — Alfred Marion Harned, my future father. He took Sally’s message, since Wehner was not at home. Several months previously, Wehner had hired Harned, a local New York City orchestrator, composer, copyist, and instrumentalist, to write out the orchestral parts for his new Piano Concerto No. 1 – for 27 different instruments of a symphony orchestra. Harned had consented to take up residence in Wehner’s house during the multiple month process, so that he and Wehner could work together intensively without interruption. Several days after Sally’s leaving the phone message and then having been welcomed back by Wehner, she was invited to a séance at his house where she met Harned in person. Within six months, Sally and Harned were married. They left New York in June, eloped to Mexico, and were wed there in August. As a final note, the Piano Concerto No. 1 did get premiered in August 1941 at the Sculpture Court of the Brooklyn Museum, performed by the New York City Symphony Orchestra, with soloist Greta Lederer.

2. As a son of a famous actress you must have enjoyed hearing about your mother’s life. Do you have a favorite story?
Sally loved talking about working on the film “Sunrise,” when she was only 15½. Director F.W. Murnau’s “Sunrise” (Fox — 1927), starring Janet Gaynor and George O’Brien, is one of the great feature films of the silent era and also a multiple Academy Award winner. Sally was particularly impressed with how Fox film studio built a replica of a large modern city on its back lot, with tall buildings, streets, running streetcars, and even an amusement park. Sally was cast in a minor part in two small but poignant scenes in the amusement park sequence. Sally, with her partner, Barry Norton, dances cheek-to-cheek across the screen, into a gradual close-up. The couple is first admiringly observed by Janet Gaynor, and a little later, during a pig chasing sequence, is discovered by George O’Brien in a kissing clinch. While watching the film, Sally loved pointing herself out to me in those scenes.

3. You recently wrote a book about your mother. Could you tell us about the book and where could it be purchased?
My book is a detailed biography of my mother’s personal and professional life from her birth in Oakland, California through to her death and burial in New York City. It took me four years to complete the work. The book includes 150 pictures, a filmography, a bibliography, and an index. It can be purchased in print edition ($14.99) or as an e-book ($9.99) from Amazon, Barnes & Noble, and CreateSpace. Below is the Amazon link:

4. This blog as you know is about Rudolph Valentino. Are you a fan?
I am definitely a fan, for many reasons. Besides Valentino’s obvious good looks and his ability to wear his costumes well, he has many other wonderful cinematic qualities. He has athletic grace and agility. Needless to say, he dances superbly, several times in his films. I love watching how he uses his hands so expressively. He is also a very good actor, particular when it is necessary for him to show his sensitive side. Take for example his tender scenes with his mother in “Blood And Sand.” In “Camille,” he subtly underplays throughout the film. In addition, for many of his films, you get the wonderful boon of Natacha Rambova sets and costumes.

5. Are there any future projects you are working on?
You have already mentioned that I will be writing an article about George Wehner in the near future.
Recently, I began writing for a new magazine, “Silent Film Quarterly.” Its first issue came out in the fall of 2015. I will have an article published in its second issue (winter 2015-2016), called “Sally Phipps Began Her Film Career At Essanay.” The article covers her work in late 1914 through early 1915 as a three-year old actress at Essanay, a Bay Area film studio. I have also submitted another article for the magazine’s third issue. This summer, I began a new book about my grandfather, Albert Edward Bogdon, my mother’s father. He was an amazing character. He was the son of poor Russian/Lithuanian immigrants and grew up in the Pittsburgh area. He began work as a magician in his adolescence and continued in this field until he joined the Navy after the U.S. entered World War I. He later earned a law degree, moved to Denver, got elected State Senator for the Denver area, but was then cut down by an assassin’s bullet at age 36 in June 1927. My grandfather Bogdon is only one of the many colorful characters in my family, many of which have already been touched upon in the already-published book about my mother, “Sally Phipps: Silent Film Star.” Their stories will keep me busy writing for many years.

Miquelito Valdes wants to buy the late Rudy Valentino’s home, Falcons Lair and turn it into a night club, calling it “The Sheik”. He’s offered the present owner $125,000. Wonder what would happen to that secret shrine in the garden? 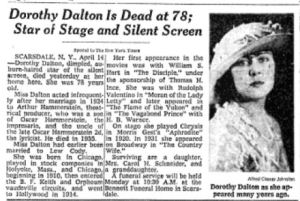 “I love children. And I would like, some day, to have a large family of them. People speak of romance… well, but the heart of romance lies, a lovely, tremendous bud, in the heart of a child, in the hearts of all the children of the world. Children are romance. they are the beginning and they are the end. They are romance, before the white wings are clipped, before ever they have trailed in the dry dust of disillusion”– Rudolph Valentino, His Private Diary 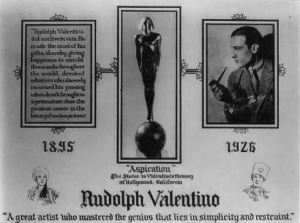 Rudolph Valentino’s second starring vehicle under his new contract with Famous Players is “A Sainted Devil”. Rudy is seen as he was before he grew the famous Titian Van Dyke, and with him are Nita Naldi, Dagmar Godowsky and Helen D’Algy as pretty a trio of screen sirens any photoplay can boast.

Rudolph Valentino’s new picture, “A Sainted Devil” from the story Ropes End by Rex Beach. Nita Naldi, Louis Lagrange, George Siegmann are a few of the prominent names which appear in the supporting cast of this production. It is a story laid in the Argentine, and tells of the country-wide search of a young Spaniard of wealthy parents for his convent-bred wife who was stolen from him on their wedding night by bandits. “A Sainted Devil” is declared to be the greatest Valentino production up to the present. 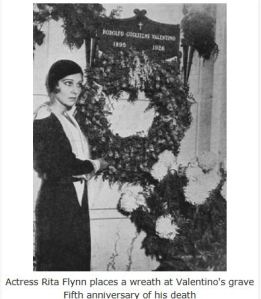 Pola Negri, whose engagement to Rudolph Valentino was announced shortly before the actor’s death, today declared the making public of messages said to have been received from the astral plane by the actor’s ex-wife Winifred Hudnut, was “shocking, profane, and commercial”. The messages, Miss Hudnut declared, were received by her from Valentino through the mediumship of George Wehner, with whom she arrived in New York Thursday from Europe. The messages did not mention Miss Negri.

Brooklyn Eagle Reporter Grace Cutler had a hand in uncovering the pointless fraud perpetrated as an incident of the hysterical funeral of Rudolph Valentino, silent film star idol of decades ago. She had been there at the funeral herself and saw the strangely worshipful crowds that passed the movie hero’s beir, wrote all the details. When thereafter a statement was given out to the newspapers which they solemnly accepted at face value by Dr. Sterling C. Wyman, the late Valentino’s “supposed” physician she became suspicious. She recalled no Brooklyn doctor in connection with the funeral. She ran down Dr. Wyman in person and presently drew from him the pertinent facts that he was an imposter going by the names of Wyman, Weinberg and others. Already he had duped President Harding with a meeting between him and Princess Fatimah, Afghanistan. In the Valentino conscious era, the story she wrote was a “clean” report that was the envy of every star reporter the dominant sex envied.

“I cannot express my grief over the loss of Valentino. He was a friend.” – Marcus Lowe, President of Lowe’s Inc./MGM 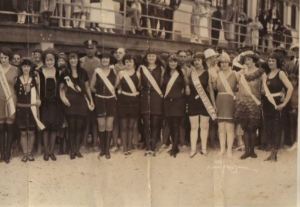