Miss Donna Hill has provided another beautiful calendar for the year 2017. Rudolph Valentino is shown with his friends and colleagues throughout this calendar. This product is spiral bound for the price of $15.00. You can purchase your calendar here:

“Natacha Rambova is a newcomer among moving picture artists, her first commission shows that she belongs to the seekers after new methods of scenic expression”. Edward Weitzel, Moving Picture World, Oct 1921 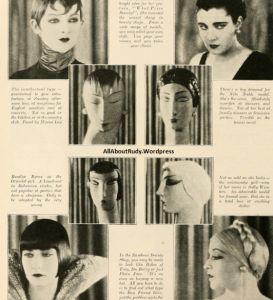 The year was 1913, the beginning of modernizing New York where old buildings were torn down and new construction widespread throughout the city in the form of luxurious hotels and house-like apartment buildings. At the same time, famous streets such as Park Avenue began their start when they became a high-class residential area. Famous New York Society Architects Warren & Wetmore were commissioned to design another ambitious project. The building would be u-shaped in the form of ultra-luxury mansion apartments combined with an apartment hotel located at 270 Park Avenue. As soon as the news hit the street rich and famous alike rushed over to become the newest building occupants. In 1917, construction was completed and newspapers had headlines that read “the largest apartment building of a kind” with an arcaded central courtyard featuring 3000 rooms and 100 millionaires who called this place home. New Residents had choices beginning with 6 room apartments up to 19 room apartments that come with exorbant rental prices no matter the apartment choice.  270 Park Avenue, had some of the most famous names of the day, as building residents. In 1924, silent film star Rudolph Valentino and his wife newly arrived into New York City from their recent trip to Europe where they bought props for their next joint movie titled “The Hooded Falcon”. They leased a long-term spacious apartment furnished with antiques purchased from abroad. It is not known how much the rent was for this apartment but from what I read the amount was massive  for that time period. While the Valentinos were living in the apartment preparing for their next picture they heard producer J.D. Williams bought the film rights for what would be Rudy’s next movie picture titled “Cobra”. However, at the same time Rudy experienced financial setback with “The Hooded Falcon” also there was limited movie studio space available in the city for them to film. So after many weeks, of delays and with an uncertain future for their movie Rudolph and Natacha decided to moved back to Hollywood so Rudy could film his next picture “Cobra”. Research has shown as of early 1925, Rudolph Valentino still maintained a lease on the apartment. 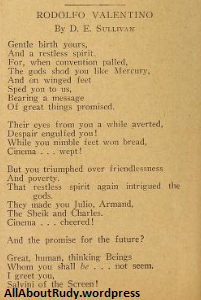 “American women have developed their own sense of beauty tremendously, especially in the last year. There is an increasing desire on the part of more and more women to express their own individuality in their clothing”..Natacha Rambova, Clothing Designer, 13 Sep 1930

This year and it is with pardonable pride that Movie Classic Magazine presents this exclusive scoop story upon the occasion of the commemoration of the 8th anniversary of Rudolph Valentino’s death. How can his memory be honored more fittingly than by the announcement that you may see him on the screen again? There has never been a autobiography of a motion picture personality before. Can it be that Rudy sensed his destiny as an immortal? Could he have felt that his admirers would remain faithful All these years? Did he recognize the demands of his public to see him after death and therefore provided an undying memorial? These are questions to which you and I will never know The answers. We can only guess. Amateur photography was one of Rudy’s hobbies. As a large number of star’s today are devotees of the amateur or 16mm camera, so did he experiment With standard-size moving pictures. In a particularly gay mood, it was his pleasure to send for a studio cameraman to film little impromptu plays that he enacted for his own guests amusements. This private film was later screen at other parties. In rummaging through some of Rudy’s effects his brother uncovered reels and reels of it. The reason this film was not discovered sooner that the cans containing it were thought to be merely discarded screen tests. It must be remembered that Alberto saw very little of Rudolph in the latter span of his life. The brothers were separated by half the world one in Italy the other in Hollywood. From time to time, there had been talk of a long-lost private Valentino film. Pola Negri once told me of it. Regretting its loss. Now it has been found. I have seen several reels in a projection room. Even in uncut un-chronological form, the film is tremendously impressive. Imagine if you can, a smiling, laughing Rudolph Valentino, a care-free vital fellow at play a tender lover. It is a far more revealing portrait of the actual person than was ever discovered. In a compromising situation by his wife and Rudy. His wife takes Alberto away by the ear and Rudy proceeds to spank Pola. There are many informal pictures posed in the swimming pool. Once Pola is seated astride a rubber sea horse waving at the camera, when Rudy suddenly dives to upset her for a ducking. Several other times there are evidences of his fondness for practical joking. With Natacha Rambova he is more sedate, the nearest approach to a playful mood being a romp with his dogs on the lawn of his Whitley Heights home. Jean Acker his first wife, appears only one time and never with Rudy. The identity of some of the other ladies who play with Rudy in this, his greatest film may never be known except to themselves. Others, of course, are well remembered actresses of the day Agnes Ayres, Nita Naldi, Alice Terry. The wedding of Mae Murray to fake prince David M’Divani consumes nearly a reel. The reception held at Valentino’s home is peopled with famous guests. Contrasting With such intimate scenes is the large amount of scenic footage taken with Rudy as the cameraman. His devotion to beauty and appreciation of it could have no more convincing proof than the pictures of his beloved Italy. He achieved startling and breath-taking pictures of imposing cathedrals and quaint little churches. He realized fully the art of the motion picture camera and made use of it with the masterful Hand of a true artist. The camera was an important part of his luggage when he made his last trip to his native land. He must have spent days traveling about, photographing things that caught his fancy Preserving bits of beauty in celloid that he might again enjoy them upon his return to America and work. There are several dozen views of the exquisite bay of Naples. Scenic Italy has been the subject of many Screen travelogues. But you have never seen it as Valentino photographed it the man was homesick and his nostalgia is evident by his almost reverent presentation of his beautiful homeland. Thousands of writers Have penned great epitaphs for Rudolph Valentino. Yet he unconsciously wrote a greater one for himself I loved beauty. Rudy also photographed the magnificent castle on the Hudnut estate. It is Believed that he took them after his separation from Natacha Rambova the girl he married under her screen name and continued to love until his death. Only once did Valentino take his camera with him to the studio and then solely for the purpose of filming his blooded Arabian horse in action. Is Alberto’s possession more than a reel of film taken at Rudy’s funeral in New York and Hollywood. Thousands of people can be seen lining the streets of both cities. Movie celebrities by the score came to bid a final farewell Charlie Chaplain, Mary Pickford, Douglas Fairbanks Sr, Harold Lloyd, The Talmadge’s Joseph Schenck and hosts of others attended the services It comprises an imposing climax for the screen’s first autobiography.

Rudolph Valentino lives again on the screen! A film record of his most intimate private life has been recently discovered by Alberto Valentino the late film star’s brother. It is possible that the memoirs of the movies greatest lover may be released to the public within the next few months.