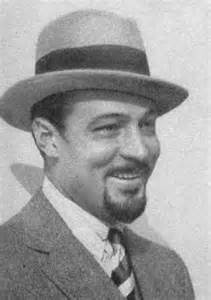 In the 1920’s, Rudolph Valentino was considered fashion forward. What he wore others would emulate him. This blog post is going to discuss the time when Rudolph Valentino sports a beard. In 1924, a new company called Ritz Carlton was formed to produce the next Valentino film. This unmade Valentino film would have been based off the story of El Cid. Set in 14th Century Spanish Court, Valentino would play a Moorish Nobleman and Warrior who falls in love with a Moorish Princess (most likely Nita Naldi).  Having the right to select his own story, Valentino decided to make ‘The Hooded Falcon’. The script was written by Natacha Rambova.  So Rudolph and Natacha went on a trip to Spain to purchase props, costumes and conduct extensive research for this movie.  While in Spain, Rudolph grew a beard. In November the couple arrived back in New York to face a barrage of photographers and fans. Valentino was still wearing the beard he had grown in Spain. Rudolph Valentino’s beard caused such a sensation and the following announcement was to be issued by the Associated Master Barbers: ‘Our members are pledged not to attend a showing of Rudolph Valentino’s photoplays as long as he remains bewhiskered”. The male population is very likely to be guided by the famous actor to the extent of making beards fashionable again and such a fashion would not only work harmful injury to Barbers but would so utterly deface America as to make American citizens difficult to distinguish from Russians’. The threat by the Association of Master Barbers strike against Valentino’s films seems extreme.