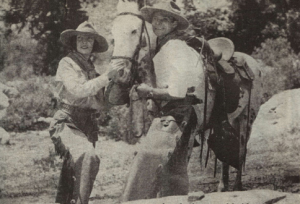 Palm Springs was known as a weekend getaway for Hollywood’s elite with its scenic views provided the perfect backdrop for relaxation and fun. The exotic trees and foliage was one of the reasons those Hollywood silent film directors would come to Palm Springs to film their movies. Rudolph Valentino made many trips to Palm Springs where he loved the great outdoors especially horseback riding, fishing and camping. 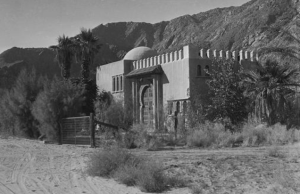 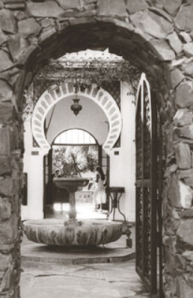 In 1921, before filming his movie “The Sheik” Rudolph Valentino and fiancée Winifred Hudnut often came down on weekends to enjoy the outdoors which provided a relaxed atmosphere for them both. On 13 May 1922, not quite a full year from divorce of his previous wife, both Rudolph and his fiancée Winifred Hudnut were married in Mexico. The newlyweds honeymoon destination was the Palm Springs Hotel, Palm Springs. There they were hosted by the owners who were friends of the couple sisters Dr. Florilla and Cornelia White. Dr. Florilla White plays a major role at Rudolph Valentino’s bigamy trial. The Valentino’s had a lot of friends who owned villas in Palm Springs. For example, in 1925, the couple were having fighting so to appease Natacha he called Ullman during their stay at the Villa Dar Marroc, Palm Springs the hideaway of Scottish Painter Gordon Coutts. Natacha negotiated with both Rudy and George Ullman for a movie to be called “What Price Beauty?” which would be financed off of her husband’s new movie contract. In Feb 1926, his last movie was The Son of the Sheikh was filmed in Palm Springs as well.

It was rumored that Rudolph Valentino had built a Spanish bungalow in Palm Springs. The bungalows location is in ‘The Mesa’ neighborhood considered one of South Palm Springs oldest and most exclusive areas. The home was later owned by movie actress Esther Williams.