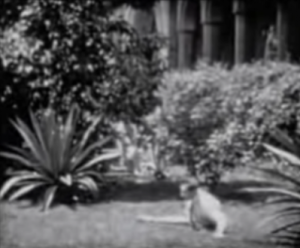 The movie “Stolen Moments” directed by James Vincent; story by H. Thompson Rich, distributed by Pioneer Film Corporation and released by American Cinema Corporation. This was the last film which Valentino played a villain.

Plot: Vera Blaine, is an orphan and the ward of rising young attorney Hugh Conway. Vera refuses a proposal from Hugh, her upright guardian because she is attracted to Jose Dalmarez, a Brazilian novelist visiting New York. Dalmarez gives Vera a photo of himself and Vera gives him a book of poetry that contains a romantic inscription inside the cover. However, Dalmarez has to return to Brazil for business and invites Vera to go with him. She takes this as a proposal of marriage and comes to his house with her mother’s wedding ring saying how romantic it would be to be married to him with her mother’s ring. He informs her that it was just an invitation to travel and she is horrified and flees the house. In the meantime, Dalmarez returns to Brazil. While there Dalmarez woos a local beauty named Inez who is the daughter of a local government official. Dalmarez and the government official’s son get into a fist fight when he observes Dalmarez kissing his sister. Years later, Dalmarez returns to the U.S. to consult a lawyer about criminal law for research on a book he is writing. Dalmarez is invited to dinner at the lawyers home who unbeknownst to Dalmarez is a friend to both Vera and her new husband Hugh Conway. Neither are aware of the past association of Vera and Dalmarez. When Dalmarez is alone with Vera he threatens to disclose her past unless she visits him. She does, and begs for the return of the book she had given him but he refuses. Dalmarez tries to kiss Vera they struggle, and she finds a heavy instrument striking him accidently killing him. Later on in the evening, a burglar enters the home and steals money and is initially blamed for the murder. The police let the burglar go because they believe the killer is a woman due to scratches on Dalmarezs face. A hairpin and a glove are found near the body. Vera returns the next night for the book and upon entering the house is discovered by Richard, who is investigating the murder case. Later that evening Campos returns through a window to obtain letters sent by his sister to Dalmarez, and is shot in a scuffle with Richard. Before dying Richard confesses to the murder of Dalmarez. Vera and her husband find happiness with the past safely behind them.

The movie was shot in several locations. The Brazil scenes were filmed at Flagler College, St Augustine, Florida. The rest of the movie was filmed at the Greenwich Plantation, and Bonaventure Cemetery, Savannah, Georgia. In 1923, Greenwich Plantation, Savannah, Georgia burned down. The only things that still exist that were in the movie are the fountain, statuary, and the reflecting pond. The Greenwich Plantation was located on the Wilmington River, with its manicured lawns, formal gardens and elegant white marble fountain was considered the most magnificent estate in the entire south. So those who are true fans of Rudolph Valentino that are ever in the Savanah or the St Augustine area there are still some places to visit that he was these many years before.