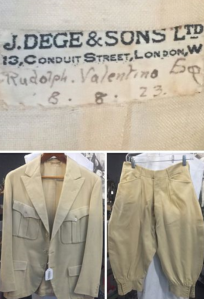 Rudolph Valentino was a stylish man about town who enjoyed his movie star success and living the American dream. It is well documented he enjoyed the finer things in life that his hard-earned salary could buy. The newspapers would write articles dedicated to Rudolph Valentino about how immaculately well-dressed he was. Rudy would often travel to Europe to purchase antiques, fine art and clothes. One of his favorite destinations was London specifically to buy specifically tailored suits and his go to store for most of his suits was J. Dege & Sons, LTD, London. This company is world famous for its military tailoring and every suit is made by hand. Founded in 1865, Arthur Dege initially operated a tailoring business at 13 Conduit Street, known as J. Dege & Sons. The original owners Arthur Dege and William Skinner met at merchant Taylor’s school in 1880. Before setting up shop together at the turn of 20th Century as Dege & Skinner. In 1912, tragedy struck when William Skinner died in a riding accident. Jacob Dege who was the son of Arthur Dege was forced to resign because of anti-german sentiment from WWI. Tim Skinner who was the son of William Skinner was placed in charge of the company. Last year, Bonhams, New York held an auction called Lights, Camera, Auction. One of Rudolph Valentino’s suits a cream wool made at the companies location at 13 Conduit Street bought during his honeymoon in 1923 was sold at the auction for $20,000. J.Dege still exists today as one of the premier tailors on Savile Row, London.