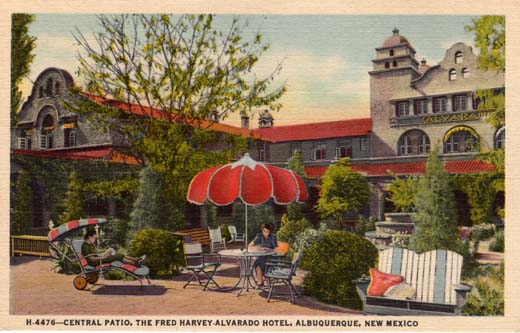 In 1878, Fred Harvey began a partnership with the Atchison, Topeka and Santa Fe Railway. In 1889, the Railway gave Harvey exclusive rights to manage and operate his eating houses, lunch stands, and hotel facilities upon the Santa Fe’s railroads west of the Missouri River. The Harvey Houses took pride in their first class food, service, and cleanliness. In 1902, the Alvarado Hotel part of the Harvey House chain of hotels was built in Albuquerque, New Mexico was a shining gem named after Hernandez de Alvarado, a captain of artillery in Coronado’s famous expedition. This famous hotel contained 75 guest rooms, restaurant, front lobby, reading room and barber shop with electric lights and the latest modern conveniences of the day. The interior was decorated in a traditional southwest theme with carved beams, massive stone fireplaces, and Spanish/Indian decorative features throughout the hotel. Famous silent film celebrities of the day Rudolph Valentino, Hedda Hopper, the Crown Prince of Denmark, Jack Dempsey, and Douglas Fairbanks with Mary Pickford, and many more would disembark from the transcontinental passenger trains that would often stop allowing their famous passengers a chance to freshen up and take a meal at the Alvarado Hotel. A popular pastime for townsfolk was watching the parade of movie stars and other notables descending daily from the rail cars to eat, stretch a bit, and perhaps purchase items from the Indians selling their wares outside the museum. In the 1930’s the hotel became a relic of the past and its history is no more except in pictures.. 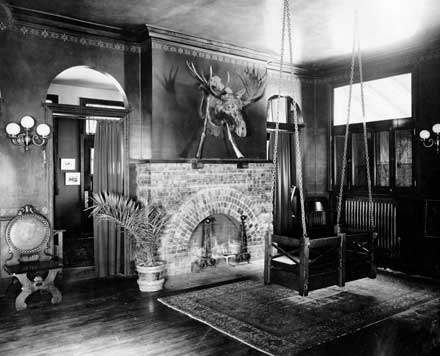