On 8 May 1915, the 4 story Barbara Worth hotel was open and located on the corner of seventh and main street in El Centro, CA.  This hotel was built at a cost at a cost of $300,000. In 1917, it was expanded at an additional cost of $125,000 adding 42 luxury suites in a Spanish style design keeping with the current architecture.  A patio and a fountain designed by Felix Peano were added from a quote in the novel “the desert waited, silent hot, and fierce in its desolation.  Holding its treasures under the seal of death against the coming of the strong ones”. 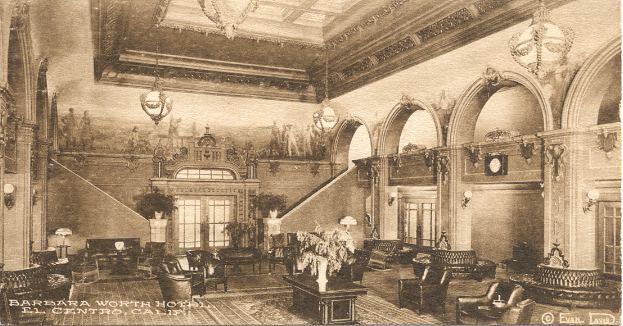 This hotel was named after a fictional character in a novel titled “The Winning of Barbara Worth” by writer Harold Bell Wright. The author dedicated the book to his friend W.P. Holt who returned the compliment and built the hotel. In 1926, Samuel Goldwin made a movie based on the novel that starred Ronald Coleman and Vilma Banky. The hotel has a spacious lobby and an artistic dining room with 4-star quality cuisine. Sixty feet below the oceans level in the heart of El Centro the building is a gem of old Spain that keeps alive the traditional hospitality.

Over the years, this hotel has suffered from allot of negative press. For example, 23 Jun 1915, the hotel collapsed in complete ruins from an earthquake. On 9 May 1916, the hotel’s manager shot and killed himself. His suicide note read “life became too lonely for him to live longer”.  Some of the more famous guests were Natacha Rambova and Rudolph Valentino. In May 1922, while enroute, to Mexicali, Mexico to get married, both famous movie stars and other members of their first wedding party stayed there for two days enroute to Mexicali, Mexico.   In 1962, the hotel burned down by a fire.