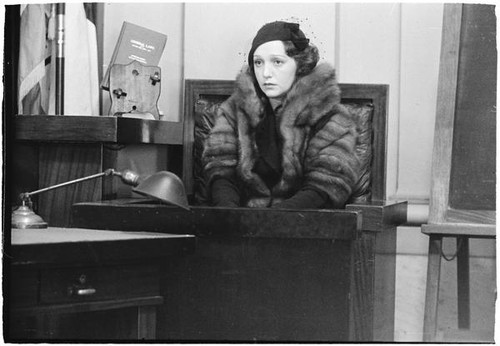 In 1931, Albert Holland a disabled war veteran started stalking Bebe Daniels. The first incident was when he broke into her hotel room in San Francisco. Albert believed Bebe was his wife and they were married in Mexico. Bebe had him arrested and he was put in custody on an insanity complaint for stalking and was jailed for two years.  In 1933, Albert fresh out of jail started back to stalking Bebe again. During the stalking course Albert wrote over 150 love letters to Daniels. In 1934, silent film actor Ben Lyon with his wife, silent film actress Bebe Daniels, appeared in court for a trial for 36-year-old war disabled veteran Albert F. Holland.

In June 1930, silent Film actor Ben Lyon married fellow actress Bebe Daniels in California. In 1935, Bebe retired from Hollywood and the entire family moved to London.  During their time overseas, was spent helping with the war effort.  From 1951-1955, the couple were in a radio series that transitioned into television series titled “Life with the Lyons”. The couple had two children and had a long and happy marriage. One year after Bebe died Ben Lyon remarried someone he knew from his younger days in Hollywood.  However, death reunited the couple and both are buried at Hollywood Forever Cemetery.

Below is a video clip showing Rudolph Valentino’s former co-star at their beach house.

Life with the Lyons BBC TV

Barbara Lyon, actress: born Hollywood 9 September 1931; married 1956 Russell Turner, 1968 Colin Birkett (one son); died London 10 July 1995. Beautiful Barbara Lyon, curvaceous and charming, was for millions of British listeners radio’s perfect teenager, the love-lorn daughter of showbiz’s unique happy family – unique because they were the only radio family that was a real one. Barbara was 19 when Life with the Lyons first took to the air on 5 November 1950, and was touching 30 when the series finished in 1961. The opening lines stayed the same for all the 300-odd episodes: “I’m Richard Lyon! I’m Barbara Lyon! I’m Ben Lyon! And I’m Bebe Daniels Lyon!” Bebe and Ben were the rock-solid stars upon whom the series was built. Bebe had graduated from supporting Harold Lloyd in his short comedies to co- starring with Rudolph Valentino in Monsieur Beaucaire (1924). Ben, born the same year as Bebe, was also a silent movie star, co-starring with Colleen Moore in Painted People (1923). They married in 1930, and both made the hard grade into talkies, Bebe with Rio Rita (1929), in which she revealed to the public her attractive singing voice, and Ben in the notorious Hell’s Angels (1930), which introduced the sexy Jean Harlow (“Pardon me while I slip into something more comfortable”).Their daughter Barbara was born in 1931, and came to Europe with her parents when they made their British film debuts in 1933. They returned in 1935, making more films, a variety tour, and their first wireless series, for Radio Luxembourg, The Rinso Radio Revue. With the onset of the Second World War, while many British actors and film makers were hastening themselves to Hollywood, Ben and Bebe did the opposite. They decided to settle in London for good. With Radio Luxembourg closed down, they took their successful comedy format to the BBC. This became Hi Gang! and, from 26 May 1940, Bebe, Ben and the comedian Vic Oliver were on the air every week, introduced by Ben’s famous line, “Welcome to your own Hi Gang! show coming to you from the heart of London!” This fast-talking 45 minutes was packed with gags, dance-band hits, and surprise guest stars, and ran for an uninterrupted 52 weeks. When Ben enlisted into the United States Air Force, Bebe launched her own show for the hospitalised and war-wounded, Here’s Wishing You Well Again (1943). It was in this series that Bebe became known as “Auntie Bebe”, a term that eventually became applied to the BBC itself – “Auntie Beeb.” After a second series of Hi Gang! in 1949, less successful in its new half-hour format, Ben and Bebe took a new idea to the BBC. Situation comedies, a success in US radio, had yet to be tried in Britain. But Life with the Lyons, starring a real family in half-hour comedy playlets, was so new in concept that it could hardly be resisted. Bebe supervised the scripts, which were credited to the writing team of Bob Block and Bill Harding, and the family cast included Barbara, their daughter, plus Richard, the young boy Ben and Bebe had adopted, and who had already appeared as an actor in several Hollywood films. The new series was so successful it became a stage play and two cinema films, Life with the Lyons (1954) and The Lyons in Paris (1955). The competent Val Guest scripted and directed these fun-packed family comedies, produced by Hammer Films. The series moved to BBC Television in 1955, with a second run the following year, but proved too fast-moving for live studio production. It moved to the new Independent Television in 1957, the first series ever to cross the channels. It was a great success. Barbara, realising she was too old to play the eternal teenager, now determined to break out on her own as a singer. Naturally shy, she tried her voice out in a Blackpool summer show, then in April 1955 plucked up her courage to apply for a test at the Columbia Record Company. She sang “It Might As Well Be Spring”, which she felt in her heart had been a failure. Within the week, Columbia called her back, offering her a year’s contract. Thrilled, Barbara cut her first pop disc. It was called “Stowaway”, and within a few days of its release, Jane Payne, the bandleader turned disc jockey, invited her on to his television series, Off the Record. Her personal performance made it a hit, and on 24 June it was listed 12th in the week’s Top Twenty. Barbara was rewarded with her own television series, Dream Time With Barbara, and in 1956 she married her producer, Russell Turner. Although much fuss was made in the popular press, the marriage failed. She married again in 1968, to Colin Burkitt, an accountant, and they had a son, but another divorce followed. When Bebe died in 1971, Ben remarried; he died in 1979. Richard made a new career out of photography, but Barbara seldom saw him. Alone, unwell, and impoverished, she disappeared from public view into a home for forgotten entertainers, where she died at the age of 63. It is ironic to remember that her catchphrase, spoken week after week on Life with the Lyons, was: “I’ll die – I’ll just die!”