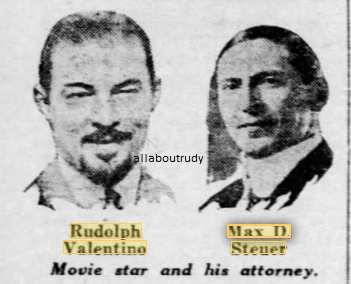 The application of Elizabeth Reilley who is assignee of the claims of Clifford Robertson and Eugene Webb, Theatrical Brokers, Los Angeles for $50,000 in comissions from Rudolph Valetnino to drop the suit was argued before Justice Gavegan in Supreme Court.  Robertson and Webb were the agents who signed Valentino to Famous Players-Laskey Corporation in 1921 for a salary of $1,250 a week.  They sued for commissions, which they said were due even though the contract was not lived up to by the Sheik.  Objection to the discontinuance of the action was made for Valentino by Max Steur, his attorney.  He was no longer repped by Arthur Butler Graham who sued Mr. Valentino last year for services rendered during the same suit but was never paid.  The present lawyer contended Robertson and Webb contract to procure engagements for Valentino at the highest possible salary. He further sets forth before the agents tied his client to the Famous Players-Lasky contract there was concern they had received an offer of $5000 a week from Willis and Inglis other theatrical agents for Valentino’s services.  Robertson and Webb are charged with having failed to let Valentino know of this and similiar offers.  In his counterclaim Valetnino asks for $1, 004.333 in damages.   Justice reseved decision.