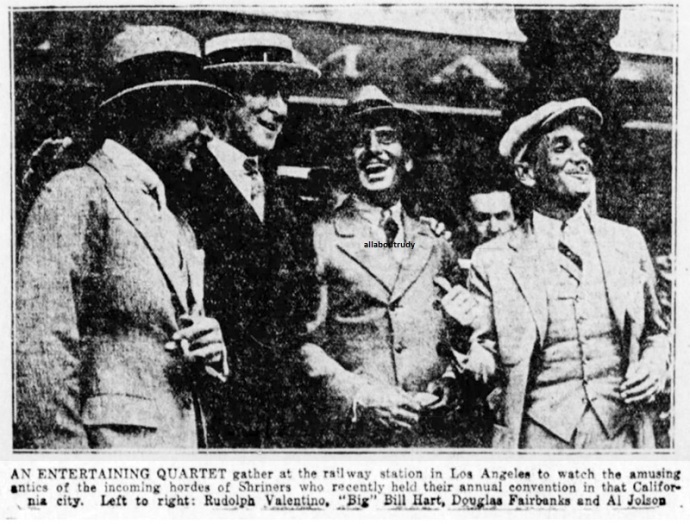 The foreign stars of the cinema, one after the other, come to France. Douglas Fairbanks and his wife Mary Pickford, and for ‘England the blonde’ Pearl White have already come smiling in the flesh to the enthusiasm of the crowds – under the Parisian sky.  Yesterday, in its turn, a new star descended from the clouds, Rudolph Valentino, Prince Charming of the cinema and his charming wife Natacha Rambova.  All of the famous silent film stars are in Paris. Mr. Valentino is having some rest before going back to New York to finish filming and judging an American Beauty Contest. The adoring crowds designated him as the most handsome man, was celebrating with his equally famous friends. The evening, in fact, a grand-banquet was setup for his party in the hotel. An international star, much more than American, Rudolpho  Gugliemi was born in Castellaneta, and is actually called Rudolph Valentino. Eight years he went to America, started living a real movie; episodes by turns dramatic or triumphant. Dancer, then screen artist, he knows about Americans – and especially American cars – a vogue almost eclipses that of trolleys. Thus, after very romantic difficulties, he married, two years ago, the daughter of the perfume king, Mr. Richard Hudnut who goes by the name of Natacha Rambova.  The photo taken shows Valentino, followed by his wife getting off the plane, at, Bourget. The arriving party will be going to Paris.  Mr. Jacques Hébertot, Director theater of the Champs-Elysées, which is in Paris, France, in charge of his interests, has engaged him.

The death of Rudolph Valentino has disarranged the production schedule of the United Artists, making it necessary for Mary Pickford and Douglas Fairbanks to abandon their contemplated Oriental Tour. Neither knows, however, what the next production will be.